Fellow Collingwood legend and former teammate and player Dane Swan has led praise for Nathan Buckley, after the Pies coach announced he was stepping down from his role.

The Age revealed on Wednesday morning that Buckley had called time after his nine-and-a-half seasons in charge of the Pies, following a difficult start to the 2021 season and continued board upheaval. 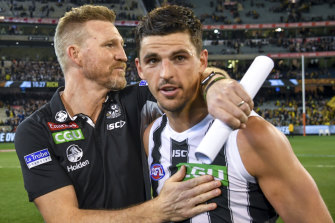 “It’s a bit of a shock. You come in to train today. It’s definitely a shock. The first time in my career I’ve been through something like this before,” Pendlebury said.

“Like everything it started to get out pretty quickly. Planned to have a chat with the leaders and then the timeline sped up so it was as a full group and he came out and just spoke.

“The first we heard of it was literally as a football department we came in and they spoke about the decision.”

Buckley’s assistant and St Kilda legend Robert Harvey will lead the Pies after Buckley’s last game on Queen’s Birthday at the SCG.

Geelong coach Chris Scott said he felt for Buckley given the Pies had played in finals in recent seasons, and that senior coaching in the AFL remained a tough job.

“It’s never been more difficult in this competition to achieve success and for a team that has gone grand final, prelim final, win a final in Perth [and] 1 games later not coaching the team, that’s a pretty quick fall from grace in my opinion but it’s the way the cookie crumbles sometimes,” Scott said.

“I feel for him a little bit but I suspect in some part there will be an element of relief for him because it is a tough caper.”