Shaun Burgoyne says the AFL "demonstrated a lack of cultural awareness" this year over the controversial decision to seek mandatory pneumococcal vaccinations for Indigenous players entering hubs in Queensland.

The AFL has reiterated its apology over the events five months ago for its handling of Queensland government requests for Aboriginal and Torres Strait Islander players and staff and their families to have the vaccinations.

After an extensive review which sought the input of the AFLPA's Indigenous Advisory Council, headed by Burgoyne, the league said it should have better investigated the initial government request. 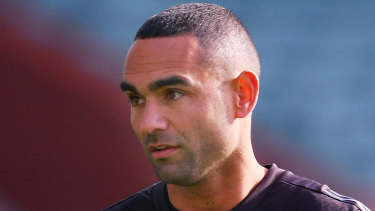 A misinterpretation of the recommendation led to club doctors being told the vaccinations were mandatory for Indigenous players if they wanted to enter Queensland.

"The AFL’s actions and communications, including its instruction to Aboriginal and Torres Strait Islander players and staff and their families to receive the vaccination, failed to sufficiently consider or ensure adherence with cultural safety principles," the league said in a statement.

"The AFL should have also better investigated the initial request from the Queensland government (including as to whether it had a necessary medical basis) and considered the potential impact of its actions on the group of Indigenous players and their families.

"The AFL acknowledges and apologises for the mistakes it made in the handling of this matter and the manner in which it dealt with and communicated the request from the Queensland Department of Health."

AFL veteran Burgoyne said the circumstances caused great distress to Indigenous players and their families and was "discriminatory and inappropriate".

"It was of utmost importance to the players that their concerns around this serious issue were heard and addressed, not just for players and their families, but for our Indigenous community more broadly," Burgoyne said.

"The handling of this situation demonstrated a lack of cultural awareness and safety by the AFL, and the players and their families were impacted as a result. It was done without appropriate thought, and, without appropriate consultation with our representatives, we were left without a voice.

"For too long, Indigenous voices have been neglected in matters that impact them, and we hope this issue is a catalyst for positive change."

The AFL has pledged it will roll out that program to AFL medical and mental health staff – as well as the AFL executive – "as soon as practicable".

On behalf of the IRB, Burgoyne said it was pleased to see the industry commit to actions to ensure the situation won't be repeated.

"By ensuring that Indigenous players are central to the decisions that impact them, we are confident that we have paved a more positive future for Aboriginal and Torres Strait Islander people in our great game."

"The work has helped us identify the issue and put in place a number of initiatives to safeguard future decisions," McLachlan said.

“A strength of our game is that it brings together people from many backgrounds and we must ensure everyone is treated equally and respectfully at all times.”