The second week of the finals will feature a team injured, written off and motivated by slights – real and imagined – in a bid to shove it up the doubters.

It’s a description often applied to Manly, but in this instance it is more apt for their next opponent. No team has endured more than the Roosters this season, yet still they endure. They have suffered innumerable casualties in the most gruelling of premiership campaigns, yet their race is not run.

They remain alive after defeating, statistically speaking, the worst team in NRL finals history. The Gold Coast scraped into the finals on points differential with a 10-14 win-loss record. Not only did they show some serious cheek, they should have won on the buzzer had the final pass of the game found hands instead of turf. Instead, they suffered their 15th and final defeat.

For once, the tri-colours welcomed back personnel. The inclusions don’t get any bigger than Jared Waerea-Hargreaves and Victor Radley. The Chooks couldn’t have done this without them.

Radley was immense. “Victor the Inflictor” was returning from a three-game suspension and quickly made up for lost time. The back-rower set up a try, saved another, produced an offload, made 25 tackles and ran for 72 metres. And that was just the first half.

One of Radley’s highlight plays, the try he set up for James Tedesco, occurred after he suffered what appeared to be a game-ending shoulder injury. Yet he refused to join the likes of Joey Manu, Luke Keary, Brett Morris, Joseph Suaalii, Lindsay Collins, Boyd Cordner Jake Friend and Billy Smith on the sidelines. 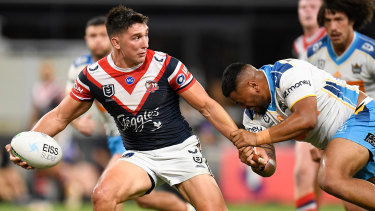 Victory Radley was brilliant as the Roosters just held on for victory over the Titans.Credit:Getty

Waerea-Hargreaves, meanwhile, was his usual indomitable self. He again won the battle of the middle, allowing Tedesco to terrorise the flanks.

No team has ever come from the bottom half of the top eight to win the finals during the NRL era and the Titans were never likely to create history. They did, however, finish a spot higher than last year and now have an understanding of what is required to ascend further.

They are a side prepared to shift the ball early and are also imposing in the middle. Had Tino Fa’asuamaleaui not committed three errors, or the bunker green-lighted a try to the dynamic David Fifita, things could have been very different.

The Roosters still have a shot at history. Luck has gone against them, they have railed against head office over injustices and been forced to pay the price. Theirs is a siege mentality.

These are pages taken out of the Des Hasler manual. “Dessie” has watched how it has all unfolded for the Roosters ahead of their impending clash, both impressed and concerned.