Four months ago, a frustrated Robbie Fox was on the outside looking in, wondering why his solid form in Sydney’s reserves team wasn’t enough to convince coach John Longmire to pick him, and increasingly worried he wouldn’t get another contract.

A few months before that he was injured, trying to get his mind off footy by herding about 20 rowdy schoolchildren at a primary school in Paddington in Sydney as an exhausted substitute teacher, acquainting himself with his career back-up plan.

On Friday night, the unheralded 29-year-old was the embodiment of the team the Swans want to be, the qualities that have got them to within one win of an AFL grand final, and the phrase that has become their mantra this September: defend to the death.

Late in the last quarter of their euphoric qualifying final win, the Swans were up by 19 points, but the Demons were coming at them. A deep inside-50 entry found Charlie Spargo, who rushed a handball over to Jake Melksham, who then looked to goal.

Enter the fantastic Mr Fox, steaming into Melbourne’s forward arc from almost 100 metres away before completing, what some are calling, the defensive play of the AFL season.

“But then him slipping over just made it a little bit easier. And then I smothered it, and it went straight to Spargo. I’m like, ‘you’re kidding me – all my hard work, it goes straight to him’. But I was lucky enough that I didn’t get stepped and could make the smother.”

It was an incredible double-effort – a lot like co-captain Dane Rampe’s similar intervention against Collingwood a couple of weeks earlier, or the dozens of other examples of desperate acts Sydney fans could probably reel off from the last couple of months. Even Longmire, speaking post-match, thought it was probably beyond Fox, but he got there, and it felt like the moment that finally broke Melbourne’s spirit.

“We speak about it all the time: defend to the death, especially in big games. You never know what might happen,” Fox said. 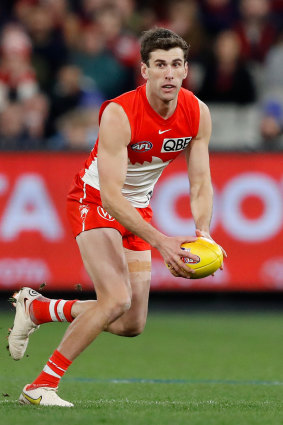 “Horse [Longmire] is always talking about defending to the death, not giving in because if you give in early, and then if Jake Melksham slips over, you don’t get there. We try to see the play out. You see something and then act on it.”

Now Fox is soaking it all in. Picked up by the Swans in the 2017 rookie draft, and cut at the end of 2020 before being relisted again, the Tasmanian utility hasn’t had it easy. Used in almost every part of the ground as Sydney’s Mr Fix-It over the past few years, he has finally found a permanent home in their back line.

“It is quite surreal,” he said. “Four months ago, I’m coming back from injury, playing in the twos and thinking [about] where I’m at. Out of contract, it’s a tough team to crack … [now] we’re into a prelim in two weeks, and we just knocked off Melbourne down in Melbourne.

“Sometimes it takes a bit of reflection. You can be a bit cranky sometimes at the coaches, disagreeing with them, I guess, but then when you actually reflect and realise it’s yourself that has to change, or your actions – then you put those in place, and I’m lucky enough that I’m playing some good footy.”

A qualified teacher, Fox can forget about marking essays for the time being.

“I did my final placement at Paddington at the end of last year, and when I was injured, I was trying to get my mind off footy for a bit. It was a great school, I enjoyed all the teachers there,” Fox said.

“It was tiring at times. You forget how hard it is to manage 24 kids for the whole day. It was a good change-up, but I’m quite happy doing what I’m doing at the moment, instead of that.”