New Cronulla recruit Dale Finucane jetted back to Melbourne on Friday night to say his final goodbyes and said there was certainly no bad blood between him and Brandon Smith, as well as denying there was a drinking culture at the Storm.

Finucane received special mention from Smith during his controversial podcast a few weeks ago where it was claimed he had consumed a bottle of vodka in just 32 minutes before vomiting into a shoe. 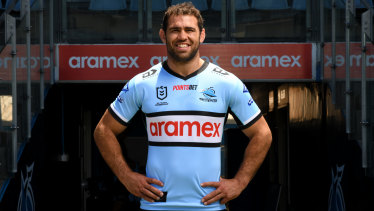 Dale Finucane at Sharks training on Saturday after joining the club from the Melbourne Storm.Credit:Cronulla Sharks

The representative forward, who returned to Sydney early on Saturday and was presented to Cronulla fans for the first time in the Shire, made a point of defending his former teammate and club rather than feeling any embarrassment or disappointment.

“You hear stories of people having a beer, but there was no malice in what Brandon was saying – he was recounting some events that had happened,” Finucane said.

“Given what had happened with the [white powder] scandal over the off-season, it added fuel to it all. There’s no drinking culture down there at Melbourne. Like anywhere and any job, it’s all about enjoying a beer at the right place and the right time.

“There are protocols and rules in Melbourne where you aren’t allowed a beer within a certain time frame before a game. It’s also designed for recovery purposes. 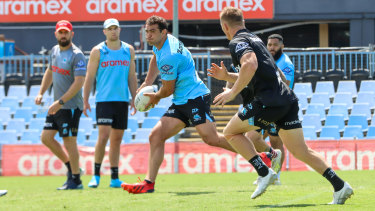 “I want to be strong on the fact there isn’t a drinking culture at the Melbourne Storm.

“I didn’t hear from Brandon and, to be honest, I didn’t know about the story until my father-in-law told me.

“I think, given what had happened around him signing with the Roosters, there were a lot of articles being written, and I was a part of it.

“He didn’t text me and I didn’t hear from him. But there are no issues. I saw him last night, but we didn’t even address it.”

Finucane and fellow Sharks recruit Nicho Hynes spent the night in Melbourne on Friday after many of the Storm players went their own way after the club’s shock preliminary final loss.

The release of grainy video images of Smith and Cameron Munster inside a hotel room with white powder on a table during post-season celebrations at the start of October came as a shock to Finucane. Munster was at the same table as Finucane at the Storm’s presentation night on Friday and did not touch a drop of alcohol as part of the sanctions he agreed to as punishment for the scandal.

“As players we know what we are and aren’t allowed to do,” Finucane said. “Whilst it was disappointing [to see the images], they’re rectifying what they have done with their actions. Cameron is on the straight and narrow, and done a stint in rehab and is off the grog.”

While Finucane loved his time at Melbourne, he has well and truly pledging his future to Cronulla and new coach Craig Fitzgibbon. The Gold Coast Titans were right in the mix for his signature, while St George Illawarra came even closer to landing the workhorse forward.

During the short time he has spent in the Shire – Finucane and his family are temporarily living with South Sydney hooker Damien Cook and his family – the 30-year-old said he had been stopped on the street more than he ever was in Melbourne.

“I could count it on two hands [the number of times he was stopped in Melbourne], although Sydney is a rugby league city,” he said.

Working with a defence-minded coach such as Fitzgibbon has real appeal for Finucane, who will call Cronulla home for the next four years. He has so much confidence in his body, the 30-year-old is backing himself to play on beyond his current deal.

“There were one or two clubs I won’t name that I seriously considered joining, but the relationship I had developed with Craig the last few years [at NSW Origin camp] and from what I had heard about him at the Roosters with defence, it excited me about coming here,” Finucane said.

Fitzgibbon returned the compliments and said of Finucane: “People believe in him. There will be things a lot of people don’t notice, but his teammates alway will. He makes people inside him and outside him better. I just love his level of intensity and focus. It’s infectious.”