It started as a way of sprucing up his house before the 2014 grand final, but has turned into a week-long adventure under the cloak of darkness, captivating people on the streets of Sydney.

If you have seen paintings of the famous South Sydney Rabbitohs logo dotted on driveways, footpaths and roads across the club’s heartland suburbs this week, it’s not by coincidence. 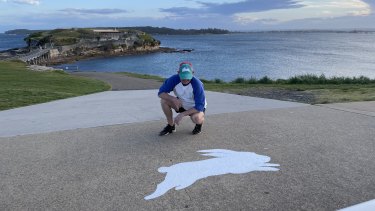 The Phantom Rabbitoh checking one of his stencilled Rabbitohs, which have been painted all across Sydney in the lead up to the NRL grand final.

A superfan of the foundation club, who has taken on the moniker of “The Phantom Rabbitoh”, has been taking requests in the lead-up to the grand final to paint the town cardinal and myrtle … or a white rabbitoh in this instance.

The rugby league version of Banksy has gone through about 90 litres of paint already this week, meeting requests from lifelong Rabbitohs supporters which started flooding social media even before the end of the preliminary final win against Manly.

The Phantom sneaks out mostly after dark, laying down a stencil and painting the logo within a few minutes before jumping back in his car to find his next assignment.

While he painted a symbolic 106 before the grand final triumph in 2014 – the number of years the pride of the league had been in existence at the time – the rush has been far greater this year.

The Phantom is up to 350 rabbits already this week, and counting.

“It came about because I started decorating my house, especially painting red stripes onto my nice green front lawn,” The Phantom, who spoke to the Herald on condition of anonymity, said.

“In that process it became obvious that it looked good, but what it really lacked was a bunny. We fashioned a stencil with a bunny.

“People started driving past and knocking on the door and asking, ‘where did you get the bunny?’ I said, ‘I don’t know where they came from, but I think I know who did it and I’ll put a good word in for you’. 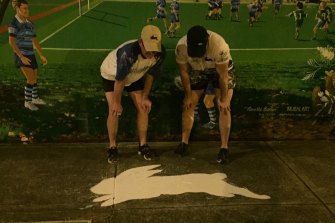 The South Sydney Rabbitohs logo which is popping up around town after dark.

“We originally called it Rabbitohs on the Road, but the concept caught on of The Phantom running around at night putting rabbits on the road outside peoples’ houses.”

Back when he started the concept, gracious recipients of the Rabbitoh painting would often leave a case of beer for The Phantom as a thank-you gesture. But this year he’s encouraging people to donate to the Rabbitohs’ charity arm, Souths Cares, which his daughter jokes will save them “having to get through 300 cases of beer”.

“Souths Cares does some extraordinary work in the community, focused on education, employment and health,” Rabbitohs chief executive Blake Solly said. “The programs reach over 15,000 people a year helping people get their HSC or find employment and every dollar contributed goes to these programs and hopefully changes the lives of the people who participate in them.”

South Sydney will be striving for their 22nd premiership against Penrith on Sunday night in a game which will double as coach Wayne Bennett and captain Adam Reynolds’ farewell to the club, while it also looms as Benji Marshall’s last NRL game.

And the joy of having the logo pop up from Maroubra to Mascot, Kingsford to Coogee and even as far south as Kurnell has put a smile on many faces, prompting the Phantom’s daughter to laugh he’s a “nutty Souths supporter gone rogue”.

Social media users have been posting images all week.

“I do it because I feel like I want to contribute something,” the Phantom said. “Having lived through some dark times where Souths weren’t very successful, when we do make the grand final I think it deserves to be commemorated in some way.

“Some clubs don’t get to play in one for 30 years, so when we do make them, we’ve got to make sure we appreciate them. We’re going around now to some houses we did last time in 2014 and the old rabbit is still there. It’s been a tough 18 months in the world and I hope this brings a bit of happiness.”