FOOTBALL is played on a huge field, over a marathon 120 minutes. But Melbourne and Geelong‘s thrilling draw at Skilled Stadium yesterday proved that, when it goes down to the wire, football can be a game of millimetres and milliseconds, not to mention one percenters. 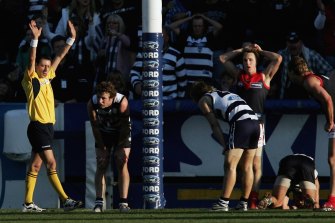 Players look shocked as the siren sounds leaving the result a draw.Credit:Getty Images

With the scores level and only moments to play, Matthew Scarlett snapped over his shoulder as the Cats surged forward again – as they had done almost all the final quarter – in a last-ditch effort to snatch a season-saving win.

But, as they had also done all quarter, it appeared yet again the Cats would squander their chance when Scarlett’s kick seemed to be sailing benignly into the arms of Melbourne defender Nathan Carroll in the goal square. Yet somehow, whether due to the floating flight or pressure, Carroll dropped the simple chest mark, allowing Jimmy Bartel to pounce. 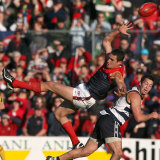 But, just as Bartel gathered a metre out, the final siren sounded and beat him by the blink of an eye to his clever handball through the behind posts that would have given Geelong the match by a point.

Brad Ottens had already had the chance to win the match with a 40-metre set shot at the 28-minute mark. But he put his kick left to level the scores. Ben Holland, in a desperate 1 per cent effort a minute later, almost certainly saved the Demons by diving in front of Scarlett to smother a kick off the ground.

And, in a game when umpiring decisions too often influenced the outcomes, there were many spectators left wondering just what might have been had the goal umpires seen two line-ball calls differently.

In the second quarter, Jared Rooke appeared to take a clean mark on his defensive goal line but was adjudged to have juggled the ball over, giving the Demons a point. On the other side of the ledger, in the same quarter, Melbourne‘s Mark Jamar, convinced he marked the ball before crossing the behind line, played on and snapped a goal, only to have the goal umpire declare it a behind. 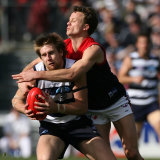 But “what might have beens” detract from a match that, although as often defined by poor as much as great play, was a truly thrilling contest.

Playing to retain a top-four spot, Melbourne dominated early and had the Cats on the ropes. With Scarlett playing at full-forward without David Neitz to mind and the Demons’ midfield on song, it appeared the result would be a formality. When Adem Yze drilled his second at the 22-minute mark, the Demons were 24 points ahead and looking good against a Cats side that was uninspired and, despite getting enough of the ball, was using it terribly.

Yze had already put in his bid for mark of the year with a spectacular ride on the back of Josh Hunt in the goal square. Hunt then returned the favour over Yze half an hour later.

Geelong found some form midway through the second quarter and got within 13 points when Steve Johnson, kicking the first of his four, and Brent Prismall goalled. But it was a false dawn compared to the one that would come in the third term, as the Demons hit back with four unanswered goals of their own to lead, at one stage, by 38 points.

And so it was that the match did not truly start until after half-time. A bake from Mark Thompson fired the Cats and their midfield, led by Gary and Nathan Ablett, Cameron Ling and Bartel, started to run. In contrast, Melbourne, which had had winners in the likes of Cameron Bruce, Travis Johnstone, Daniel Bell, James McDonald and Brad Green, became stagnant and indecisive.

The Cats kicked five on the trot to get them to only nine points down going into the thrilling last quarter.

Where they had been finding targets early, the Demons resorted to bombing the ball out of defence in a tactic that merely resulted in it being bombed back in. They can be thankful the Cats returned the favour by more often than not bombing it back rather than seeking a free man.

Steve Johnson’s goal brought the Cats to within a point but moments later he flattened Holland with a contentious shirtfront allowing Scarlett to goal and the Cats to hit the front for the first time in the game.

Jamar’s mark and crunch goal 22 minutes in levelled the scores at 93 apiece, Yze then Ottens adding the extra behinds.

Having been booed off at half-time, the Cats were given a standing ovation as they left Skilled Stadium for the last time this season. For the Demons, the shared points were enough to keep them in the top four, if more by millimetres than miles.