Home » From the Archives, 2011: Swans hold on to draw with Demons

Swans hold on to draw with Demons 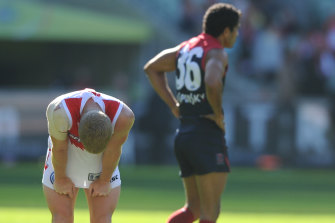 Sydney and Melbourne players after the draw.Credit:Pat Scala

A snapped Ryan O’Keefe behind allowed Sydney to salvage a draw after Melbourne almost snatched a comeback AFL win at the MCG on Sunday.

The two sides were level on 11.18 (84) at the final siren, after the Swans wasted chances to bury Melbourne in the third term, then the Demons returned the favour in the last.

Sydney led the match for all but a few minutes late in the final quarter, after a lunging soccer goal from new Melbourne captain Brad Green put the Demons two points in front – their first lead – almost almost 24 minutes into the term. 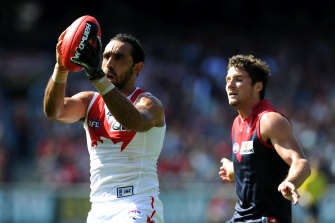 But the Swans, who had spent most of the quarter under siege in defence, managed to lock the ball in attack for the remaining minutes, scoring a rushed behind, before O’Keefe’s quick kick from a stoppage tied the game.

Melbourne had piled on the pressure for most of the term, after trailing by 14 points at the last change, but hurt their chances with a string of missed shots, kicking 3.6 to 1.4 for the quarter.

The Swans, who kicked four of the first five goals of the match, were about two goals clear for most of the day and stretched their lead to 25 points late in the third quarter.

They should have been further in front, kicking 3.9 for the quarter. 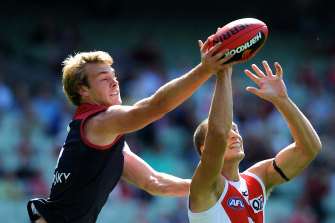 They were made to pay, when Melbourne kicked two goals in time-on to narrow the gap.

Swans co-captain Adam Goodes had the chance to add some breathing space, but missed a 15m set shot seconds before the three-quarter-time siren, to leave Melbourne in touch.

Goodes finished with 2.3 for the day, after a good battle with Melbourne’s Colin Garland, while small forwards Ben McGlynn and Jude Bolton kicked three goals each for the Swans. 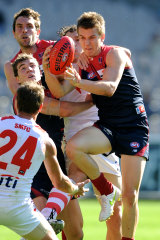 For Melbourne, Lynden Dunn, Liam Jurrah and Green kicked two goals each, but Dunn and Jurrah were both among the culprits with missed shots.

Melbourne’s substitute Ricky Petterd came on at the last change, and had a big impact in attack to help his side erase the deficit.

Midfielder Brent Moloney was an excellent ball-winner for the Demons, well-served at the stoppages by ruckman Mark Jamar, while Aaron Davey used the ball cleverly.

For the Swans, Jarrad McVeigh and Kieren Jack were good in the midfield, while Ted Richards performed well on Jurrah.