Home » From the Archives, 2012: Riewoldt kicks eight, Tigers down Saints

Richmond needed an eight-goal haul from Jack Riewoldt and enormous character to post their first AFL win over St Kilda in eight years at Etihad Stadium on Friday night. 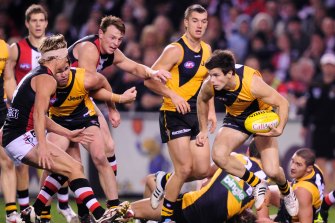 Richmond’s Trent Cotchin looks for a way around the pack at Etihad.Credit:Sebastian Costanzo

The Tigers led for most of the night, but the Saints threatened to produce a remarkable comeback victory when they came from 20 points down early in the last quarter to hit the lead with four straight goals.

Riewoldt’s haul continued his form resurgence, after he booted six in last weekend’s win over Hawthorn.

It took him to top place in the Coleman Medal race with 31 goals for the season.

For the Saints, youngster David Armitage and veteran Lenny Hayes battled extremely hard in the midfield, Hayes having 16 second-half touches to try to drag his side over the line, while Brendon Goddard also had a big game. 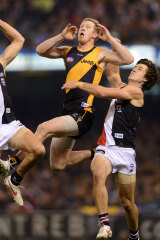 Richmond’s win followed 13 losses and a draw in their previous 14 clashes with the Saints and lifted them to a 5-5 record.

With four wins in their past five games, including quality victories over Sydney, Hawthorn and now the Saints, it will raise hopes they can reach the finals for the first time since 2001.

The Tigers twice looked to have the game in their keeping, when they pushed 20 points clear early in both the third and final quarters.

But the Saints kept coming, hitting the lead in the last term when Armitage, Nick Riewoldt and Jason Gram combined for four goals in a six-minute burst.

But, after a series of close losses already this season, the determined Tigers bounced back, with Jack Riewoldt sealing the win in his 100th AFL game.

Richmond coach Damien Hardwick said in some ways the victory was more satisfying than the previous round’s 62-point win over Hawthorn, given the pressure.

“For our guys to overcome that, against an experienced side, where we could actually get back in front and solidify the result was a sign of a side that is improving,” Hardwick said.

While the Saints clearly felt the absence of injured ruckmen Ben McEvoy and Rhys Stanley and star defender Sam Fisher, coach Scott Watters said they should have done better with the side they had.

“We picked the best side we have. I thought Jason Blake battled really hard in a number of different positions,” he said.

“We’d love a key defender at the moment, but we don’t want to whinge about that, that’s part and parcel of the game.”