Greater Western Sydney are seriously considering selecting close childhood friends Finn Callaghan and Blake Howes with their opening two picks at next week’s AFL draft in the hope the pair would remain together deep into their careers.

The Giants have been made aware that the Sandringham Dragons duo, who have shared a tight bond since early childhood, are likely to want to play alongside one another in future. 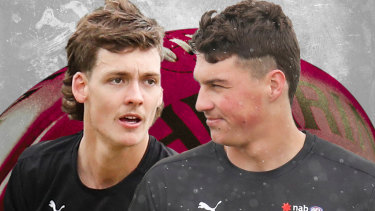 Great mates Blake Howes and Finn Callaghan could find themselves drafted together to the same team.Credit:The Age

If the moves were executed, GWS would take the smooth-moving Callaghan with their opening selection — currently pick two, but it may slide to four pending father-son bids on Nick Daicos and Sam Darcy — before selecting Howes with their next pick, which is certain to be at 15 on draft night.

The pair attended kindergarten, primary school, and high school together at St Bede’s College, and have played football alongside each other through the junior ranks.

Howes is a highly touted prospect in his own right and is viewed by some as a possible first round bolter. He has spent time in the forward line as a third tall but his athleticism and speed also allow him to play on the wing — a position he excelled in this season.

He ran the 20-metre sprint in less than three seconds during pre-season testing, despite standing at 190 centimetres, and has improved his aerobic capacity during the year.

The Dragons even planned on trialling him as an intercept-marking defender before the season shutdown.

GWS could also consider Josh Rachele with their first pick on a list needs basis, particularly given the uncertain future of fellow small forward Bobby Hill. The Giants have also been linked with athletic ruck-forward Mac Andrew.

On the other hand, if the Giants drafted Callaghan and opted against picking Howes with their next selection, Victorian clubs would be aware that picking the latter could give them an opportunity to reunite the pair in the future.

Callaghan is comfortable in commencing his career interstate and appears almost certain to do so, with Gold Coast and Adelaide set to select after the Giants, but the nature of his longstanding friendship with Howes has given clubs an extra element to ponder when considering the duo at the draft.