Veteran defender Dylan Grimes’ already outstanding football resume has been improved with the backman taking out his first Jack Dyer Medal as Richmond best and fairest on Thursday night.

Already a three-time premiership hero, and named All-Australian two years ago, Grimes finished atop the count, which was held virtually because of COVID-19. 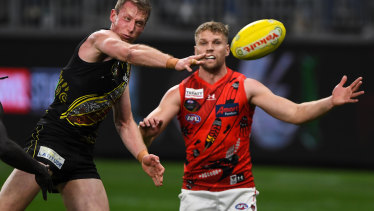 His previous best finish had been third.

He led the Tigers for intercepts and one-percenters, was second for marks, third for contested marks and fifth for rebound 50s.

Despite missing the final month of the season through injury, superstar Dustin Martin still managed to finish equal fifth, alongside Jack Riewoldt.

Richmond’s continued reliance on its experienced nucleus was reflected in the fact that the top 10 was filled entirely by members of the club’s recent premiership seasons.

The Tigers plummeted down the ladder in 2021, finishing the year in 12th after struggling in the run home.