Jamal Fogarty’s first NRL contract with Parramatta lasted roughly nine months before he walked away ready to shelve his first-grade aspirations for good, but he still thanks Brad Arthur for imparting one of rugby league’s great life lessons.

Fogarty will steer Canberra’s bid for another finals upset against the Eels on Friday night and pending concussion protocols, marquee halfback Mitchell Moses.

A footballing lifetime ago, Moses’ arrival at Parramatta midway through 2017 was followed shortly afterwards by Fogarty’s release request given his NRL pathway was blocked and he and his family were struggling with Sydney life.

When Fogarty left the Eels at age 23, the schoolboy star figured his NRL aspirations were staying behind in blue and gold as well.

His subsequent rise as a Titans injury fill-in wearing $80 boots (all his football gear was still sitting in a removal truck) later that year, followed by three years of Queensland Cup and an eventual NRL return, is one of the game’s great success stories.

Fogarty has ridden all the way to a life-changing, $400,000-a-year Raiders deal and a critical first-half try against Melbourne at AAMI Park.

“But when I moved back home after Parra, I wasn’t thinking footy at all. NRL wasn’t on the radar at all,” Fogarty said.

“I went down and trained with them for most of the season but my family and I, we really struggled and I wasn’t enjoying my footy at all. I wasn’t in a good place and I just said, ‘it’s best for all of us to go home and be happy’.

“I didn’t worry about signing anywhere else. I was going home, getting a job and playing Queensland Cup.

“I was lucky to play two games with the Titans but then I went out and got a job as a youth worker for the next three years before footy happened again for me.”

It was Arthur who led Parramatta’s interest in Fogarty five years ago, flying the Burleigh Bears half down for a tour of Eels HQ and eventually a two-year deal. 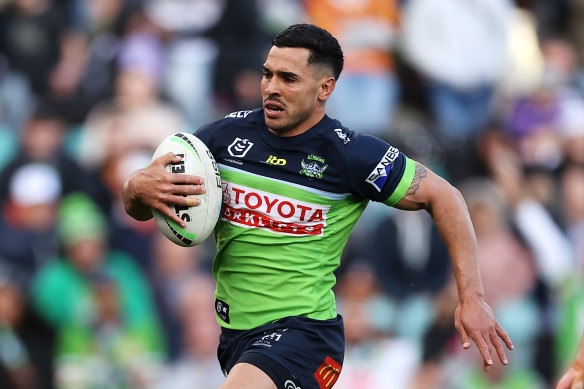 Jamal Fogarty is starting to hit his stride in Canberra colours.Credit:Getty

Fogarty credits Arthur’s “straight-shooting nature” as one of his biggest learning curves in the game.

“But that conversation (about leaving Parramatta) with BA wasn’t the tough one,” he says.

“It was more telling my partner that I’d worked my backside off to get an NRL gig, we were there, but I wasn’t happy. That was tougher given the sacrifices we’d made.

“That said, I learnt a lot from BA given how honest and up front he is with his conversations.

“He showed me that you don’t want conversations to be all warm and fuzzy. You want the truth. Nothing was sugar coated and that was the best thing for me that I learn at that point.”

Fogarty, wife Kahlia and their two daughters are thriving after their latest sea change to Canberra, the far and wide-sourced nature of the Raiders roster helping him settle on and off the field.

“We’ve got players from England, New Zealand, Queensland and all over,” Fogarty says.

“They move here away from their families and the one thing the Canberra club do so well is create a culture where you do feel like you’re at home.

“From day one, the way they’ve treated me and my family has been so welcoming right until now and that’s a big part of our form.

“It’s such a tight-knit club and we spend a lot of time together away from footy. You can’t help but buy in and enjoy playing together in that environment.”