Penrith have been burned in the past by signing players to long-term deals, but they are far from spooked when it comes to pressing ahead with a mega four-year extension for star prop James Fisher-Harris.

Already signed until the end of next year, Fisher-Harris and the Panthers are hopeful of signing off on a fresh contract, understood to be worth around $3 million, that will keep him at Penrith until the end of 2026. 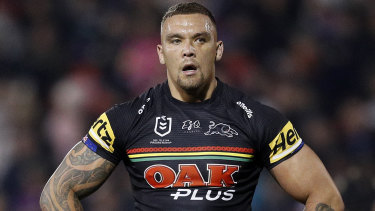 “What ‘Fish’ is doing now he has been doing the whole time since I’ve been back at the club, and even before then.

“He was our best player in 2019, had a great year last year in a new role as a legitimate front-rower, and just continues to develop.

“He’s now 25, he’s still developing but he’s right in that sweet spot in terms of how many games he’s played and his experience.

“‘Fish’ is incredibly hungry to improve all the time. He’s not the biggest front-rower but he plays big. I don’t want Fish going anywhere. And I don’t think Fish will be going anywhere.”

Cleary said Tetevano had played a huge role for the Panthers last year after he arrived from the Sydney Roosters, who were premiers at the time, and while he had since departed for England, the legacy he left had been taken on by Fisher-Harris.

“Sometimes you recruit people and all you get is what they deliver from a playing perspective,” Cleary said. “But other guys have something extra they add to culture. Zane was definitely one of those guys.

“He came through the Knights and then the Rosters while they were having a lot of success. He brought something to our club we didn’t really have in terms of that level of intensity, mostly around training but playing as well.

“Our guys fed off that. We didn’t want to lose Zane, but when he did go, it was important his legacy stayed with us, and Fish has been the main guy to take that forward.”

Two weeks ago, the prospect of the Panthers hosting Manly in Bathurst shaped as a huge mismatch. But the return of Trbojevic, the Sea Eagles having won both of their games this year with him in the side, has turned the bush game into the best game of the round.