Home » ‘I hope I don’t get the tap’: Cherry-Evans admits fear of Sea Eagles exit

Manly star Daly Cherry-Evans is concerned he may be asked to leave the club where he has made his name and won a premiership.

He is the Australian halfback and Queensland captain, but he doesn’t feel safe, admitting he gets anxious when his name gets linked to other clubs. It’s a thought he has had for some time, but today he makes it public. 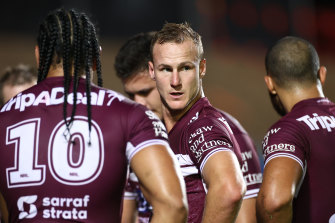 Manly captain Daly Cherry-Evans wants to see out his career at the Sea Eagles.Credit:Getty

“I have a good management team and this is something for them to deal with. If Manly are looking to do something with me they certainly have not told me or my manager.”

Cherry-Evans is on his way to becoming a Sea Eagles great and it’s something he wants to achieve.

“I love this club and I want to be here forever,” he said. “Any talk of me and other clubs is not coming from me or anyone associated with me. My aim is to play my career out with the Sea Eagles.” 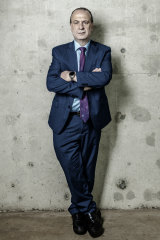 One of ARL Commission chairman Peter V’landys’ strengths is reading the room, and right now he is a favourite of the man in the street. The cheers that greeted his appearance on stage at the Anzac Day clash at the SCG were unbelievable for an official.

However, there has been significant public opposition to the NRL’s conference idea of expanding to 18 clubs and splitting them into two conferences of nine with one conference made up exclusively of Sydney clubs.

NRL clubs are starting to look for some clear air. Life in a washing machine of constant change is wearing thin.

Strangely, the NRL could not have done more to sabotage its own proposal for a two-conference system before it even got to first base. The proposal was always going to be contentious and attract its critics because it was an idea championed by former Panthers general manager and Channel Nine commentator Phil Gould.

Any positivity was diluted by the bewildering delivery of the concept.

This is the biggest proposed change to the structure of the competition in many years – which would change the very fabric of the premiership – yet the NRL dropped the idea at a club meeting without any details or explanation and seemed shocked that it leaked to the media.

Cynics may say it was a calculated move to divert attention from recent negative coverage about the judiciary and concussion. It stopped that coverage, replacing it with stories that there would never be another all-Sydney grand final, that all the Sydney teams would be in the same conference and that all the non-Sydney teams would be lumped into the also-rans competition. The NRL sat back and allowed the rumours to spread. Then, when the predictable outcry erupted among fans, they sent former ARLC chairman and politician Peter Beattie to sell the idea to the media.

If ever a proposal needed credibility to survive it was this one. Only then did V’landys emerge to explain that the two-conference concept had not been finalised, that the commission had not seen the detail and that it is only a 50-50 chance of proceeding.

The idea should have been delivered as a concept to the whole game – clubs, state governing bodies, the media, the fans – so it could be debated properly.

Unfortunately, this episode follows a familiar pattern. The NRL has adopted an approach of announcing grand plans only to see them fall in a heap when it comes to the detail. Changes to Origin eligibility, staging three grades at the same venue on the same day, bringing NSW Police Commissioner Mick Fuller onto the ARLC … all were announced in a blaze of publicity only to be discarded. Innovation is good, but the NRL needs to do its homework before announcing changes.

Latrell Mitchell’s brave stance against racist trolls has the backing of the man who previously wore the Souths No.1 jumper.

“It’s a great stance for everyone, not just league players,” Greg Inglis said. “I’ve taken a different approach. The new company I’ve signed with, Rich Digital, monitor my social media and that keeps my mind clear.”

It’s been a huge week for Inglis: he got engaged to his long-time partner Alyce and was due to make his return to rugby league overnight with Warrington. 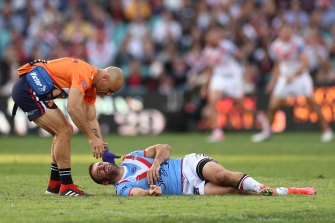 James Tedesco receives assistance after being floored by Jordan Pereira.Credit:Getty

Once again the Roosters are leading the way in their handling of concussions.

They won’t say it publicly, but skipper and star fullback James Tedesco was suffering headaches after he was hit high on Anzac Day and the club had no choice but to rest him.

The lack of fight Wests Tigers players showed on the day they were supposed to be honouring Magpies great Tom Raudonikis has been used as a reason to call for coach Michael Maguire to be sacked.

What has not been raised publicly was the centre-stage performance of chairman Lee Hagipantelis before a ball was kicked that day. And it highlights how the club’s hierarchy is lacking in direction and out of touch.

Wests Tigers have struggled with their identity since day one. The way Hagipantelis was front and centre displaying a “retired” No.7 jumper to the Leichhardt Oval faithful was difficult to watch.

Almost anyone else who played for Wests or West Tigers would have been better to hold the jumper than the chairman. The head of a law firm in designer clothes was about as far way from Raudonikis as you can get. 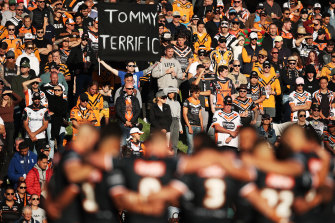 The entire Wests Tigers squad were at the SCG for Tommy Raudonikis’ public memorial.Credit:Getty

I asked Hagipantelis if he was close to Raudonikis. The chairman was honest with his answer: “No.”
So, why did he hold the jumper?

“I was asked to and it was an honour,” he said.

He is angry at the perception that he was trying steal the limelight.

“I was not doing it to big note [myself] – that’s not me and I’d like to know where this is coming from,” he said. “It’s ridiculous. I don’t need to promote myself or my business. My business is doing fine. I don’t understand the perception. I was asked by the board to retire the Wests Tigers’ No.7. We didn’t have much time to organise things, so I did it and we will do a special tribute to Tommy on May 9 in Campbelltown where we will play in the Wests jumper. It will be a great day.

“If anyone has a problem with what I did, they can contact me … I answer all my calls and I am always available and I only retired the jumper because I was asked.”

Hagipantelis is an intelligent man. On reflection, he will realise it was a poor decision.

“I’ll wear the bad decisions, but I won’t put up with personal attacks,” he said.

He has the ear of a number of journalists around town and knows very well how to deliver a message. His public support of his coach has been tepid. Until now.

“We are not looking to sack Michael,” he said. “I have not been saying anything differently to people privately. I have told Michael the same thing I am saying to you. He is safe.”

What is clear is that Maguire has not had a clear run with the Tigers.

“Madge” considers the media to be an intrusion. The last thing he wanted was a documentary made of their season. But that’s what is happening. It is being done to appease sponsors. It is hard to imagine Maguire’s mentor, Craig Bellamy, bending or being made to bend to allow this to happen.