Home » Rugby League » ‘I see two posts, not four’: Inside the mind of Collingwood’s new sharpshooter

Steele Sidebottom says the ball shouldn’t do what Ash Johnson gets it to do.

Twice, from the boundary, 40 metres out from goal, he has curled the ball in and around the goal post and almost back out again like it was going through a chicane.

Johnson can’t quite explain why it does that either, he just knows he knows how to do it. He admits the first goal he bent in – and almost out again – for a goal against Carlton in the final home-and-away round was luck.

“That first one was probably a fluke against Carlton,” he said, with words that will do nothing to ease the Blues’ pain for the agonising loss.

By the time the qualifying final came around 12 days later and he found himself in an almost identical position on the paint of the boundary 40 metres from goal in the right pocket he felt more in charge of what he was doing.

Sidebottom said: “We watched it again on replay … It almost swung back out. I don’t know how it’s possible.

“I have seen it when Leon (Davis) was here years ago, but I don’t think it is how a footy is meant to go if you kick it properly but if he keeps kicking them like that I don’t mind.”

By Saturday against Geelong Johnson was sure he’d kick the goal. Well, fairly sure.

“Coming into the game on Saturday I practised a few of them and got like three out of four I think, so I was pretty confident during the game,” he said. 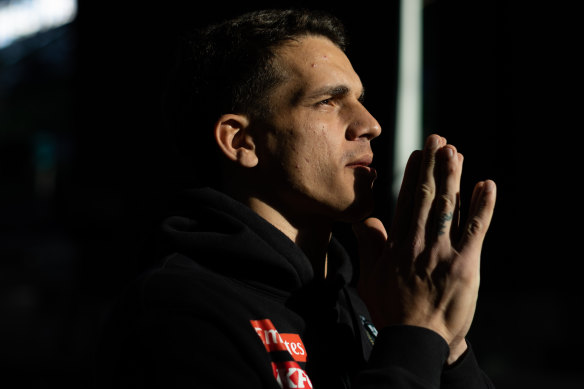 Ash Johnson: having a remarkable impact with Collingwood.Credit:Jason South

He sees the crowd before the game not during it, and when he aims for goal he focuses only on the small target not the big.

“I’ve said to most people I see two goal posts not four,” he said.

“I soak it in before the game starts, so I go out and spend as much time as I can. I will go for a quick little jog around the 50 arc have a glance at the crowds and look at all the seats that aren’t filled that are about to be filled. I just soak it all in while I can, then go in get warmed up a come back out. I don’t really notice after that.”

That he would have the nerve to kick the goals so confidently in front of a combined 180,000 in the MCG belies the fact he was in his sixth and seventh games. Despite having not yet played 10 AFL games, he is about to turn 25 so is physically mature and feels mentally ready for AFL footy.

One of Ash Johnson’s stunning goals from the boundary line.Credit:AFL/Twitter

This shouldn’t surprise for his path to the AFL has been among the most circuitous, from Halls Creek to Collingwood via seven clubs in three states. He was driven to get to AFL after watching not only his cousin Sam Petrevski-Seton make it but latterly his brother Shane McAdam get his chance.

“And especially when I start playing league footy in Adelaide just a bit of fame as well, your name in the newspaper on tv it’s a good feeling, so I think I just wanted to go a step further.”

For Sturt he took a mark that hints at the other parts of his game we have barely seen at AFL level yet.

“He has such long limbs, so athletic he is almost the perfect build in a way he sits on heads at training which not everyone likes, he is just one of those players who can pull anything out of the hat,” Sidebottom said.

“He has a lot of potential and has nowhere near reached that yet.”