Home » Rugby League » If Latrell is available, Fittler must pick him for Origin II

It’s silly to say one man can save NSW from State of Origin oblivion, but you can bet coach Brad Fittler will be turning his weary eyes towards Latrell Mitchell for Origin II.

The South Sydney fullback has been in the wars of late. He’s been sidelined for eight weeks with hamstring and knee injuries before an untimely bout of COVID-19 delayed his return to the field this weekend.

But if there’s one thing the Blues need heading into the must-win match in Perth following the 16-10 loss in Sydney, it’s the imposing shadow of the 24-year-old causing mayhem and mischief. There’s nothing more cringeworthy in rugby league than the term “X-factor” — “good ball” and “eyes up footy” are getting there — but that’s what Mitchell can provide.

The parallel between the last Origin played in Perth and this one is easily drawn. You’ll recall NSW headed to the west for game two of the 2019 series needing to win after losing the opening match at Suncorp Stadium 18-14.

Things were tense. Fittler wasn’t happy with the reporting around Mitchell and Cody Walker’s national anthem stance while both had played poorly. Walker was dropped, Mitchell only just survived.

When all seemed lost, Fittler handed the keys of the side to Blues assistant coach Andrew Johns, who ripped up the attack and started all over again. Tom Trbojevic returned from injury and Johns engineered a game plan in which he was used as a second fullback along with James Tedesco. 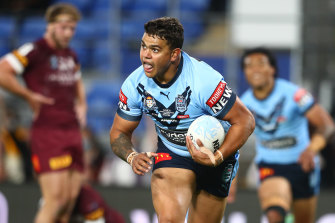 The result was a 38-6 victory with Trbojevic scoring three tries. In the third game, in Sydney, NSW clinched the series with a Tedesco try in the final minute.

Of course, Mitchell is a different sort of player to Trbojevic but shares that innate ability to blow a game apart. He was devastating in last year’s series and, let’s face it, can be very hard to contain when he puts on his cranky pants. NSW weren’t cranky enough on Wednesday night. They approached it like it was a club game.

Whether Mitchell will be fit is the immediate question. Souths say his fitness is “touch and go”.

The Rabbitohs have done a typically professional job getting him going again but catching COVID-19 means he won’t make an appearance at Redfern until Monday morning. Coach Jason Demetriou will then have to decide if Mitchell should play on Thursday against St George Illawarra at WIN Stadium.

Then Fittler must decide three days later if Mitchell is worth the risk with little or possibly no game time under his belt. Then he must decide where to play him. The logical choice would be at left centre, with Jack Wighton — arguably the Blues’ best on Wednesday night — becoming the utility on the bench.

Fittler is fortunate that Souths’ head of high performance, Travis Touma, is also on the Blues’ coaching staff.

Mitchell is a risk, no doubt. He’s also the player who can turn this Origin beat around.

Speaking of cranky pants, Fittler had his on good and tight as the result slowly turned Queensland’s way.

That’s what I love about Freddy: he can’t hide his emotions. Ricky Stuart is the same. Cranky is the new black.

Fittler had several pointed digs at referee Ashley Klein for allowing the Maroons to slow down the ruck. Asked by Paul Gallen on Nine what his players needed to do before game two, he said: “A lot more wrestling.”

A second viewing of the match revealed this Origin for what it often is: rugby league played at breakneck speed until both sides became exhausted in the final 20 minutes.

There’s no doubt Queensland slowed down the ruck late in the match, getting entangled in the play-the-ball like their assistant coach, Cameron Smith AKA “The Human Octopus”, did during his playing days.

Weirdly, not much has been made of Klein allowing Kalyn Ponga and Ben Hunt to lay on Isaah Yeo in the final seconds, just a metre from the line. Klein yelled, “Get up! Get up! Get up!” But instead of awarding a penalty, and possibly using the sinbin, he blew fulltime.

A Sheens of respectability

Just as the Reserve Bank likes to drop interest rate rises on Melbourne Cup Day, the Wests Tigers and Warriors decided to “part ways” with their coaches the day before Origin.

The NRL was furious about the timing, particularly with the Tigers who have been sharpening the axe over Michael Maguire’s head for the past 18 months but let it fall on the eve of one of the season’s biggest matches. 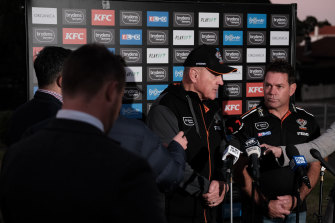 Tim Sheens and Brett Kimmorley front the cameras on Tuesday evening after the decision to sack Maguire.Credit:SMH/Oscar Colman

Presumably, the chairman and chief executive only show their faces when there’s a Fox Sports documentary to shoot.

Sheens is that club’s glimmer of hope in these troubled times. Standing out in the freezing cold as he battled the flu, he repeatedly told reporters Maguire’s sacking was his “decision”, even when it wasn’t.

He made a recommendation to the board but instead of ducking and weaving like everyone else at that club, he owned it. Now that’s leadership. Sheens doesn’t care about media perception. He cares about the club with whom he won a premiership in 2005.

If Penrith assistant Cameron Ciraldo does end up taking the job — and that’s not a given by any means — he should ask for a get-out clause if Sheens ever leaves.

For months, George Kambosos jnr told those to close to him the ace up his sleeve for his fight against American Devin Haney was a series of direct messages Haney had sent him in the lead-up to his world title fight against Teófimo Lopez.

Kambosos dropped the bombshell at a media conference in Melbourne a week before his bout against Haney, calling him a “rat”, but the ploy had absolutely zero effect on Haney’s mind or his long, snappy jab when the two met at Melbourne’s Marvel Stadium on Sunday. Haney won via a unanimous points decision.

The incident was the catalyst for the fiery scenes in the ring after the fight involving Kambosos’ father, Jim, and Haney’s father, Bill.

“He was complaining about the trash talk during the week,” Kambosos told this column. “But that’s just boxing.”

Graciously, Kambosos went to Haney’s dressing-room after the fight to congratulate him on his win and the moment was captured by FightHype.com.

“Tonight, you had your victory, enjoy it man,” he told him. “Those belts are bloody heavy.”

Bill Haney then butted in.

“Where’d you get that rat shit from?” he asked. “Who told you to say that?”

“What surprised you [about me]?” Devin asked.

“You can’t hurt me,” Devin replied. “You know what surprised me? You’ve got better hands than I thought.”

In Barcelona in February 2020, the Sydney Roosters visited the youth academy of football giants Barcelona FC ahead of their World Club Challenge clash with St Helens later that week.

They left Barca’s training facilities that day determined to set up something similar. And so it came to be that the Sydney Roosters Academy was born with the aim, as Roosters chairman Nick Politis puts it, “produce great footballers but better people”.

It is funded by the Roosters Foundation, which was launched on Thursday night in signature Roosters style: a function at the Intercontinental Hotel in Double Bay, presented by jewellers House of K’dor, with singer Amy Shark belting out some of her famous tunes.

“I barely know what I’m doing, let alone the other team knowing what I’m doing. That’s when I play my best footy.” — Queensland star Cameron Munster, who was not only man of the match in Origin I but probably bumped up his asking price for his next deal by about $500,000 with a King-esque performance.

It’s not easy following Bradman but Mat Thompson called his first State of Origin a treat for Channel Nine — publisher of this masthead — after Ray Warren decided to retire after 33 years and stranded on 99 Origin calls. In a nice touch, the great Rabs emailed his Nine colleagues on the day of the game to wish them the best of luck.

Major drama in the Major League Rugby competition with the LA Giltinis and Austin Gilgronis — who are both owned and named after F45 founder Adam Gilchrist — kicked out of the competition. The Giltinis feature former Wallabies Matt Giteau and Adam Ashley-Cooper and Storm centre Will Chambers. There are unconfirmed reports of salary cap breaches.

The Golden State Warriors and Boston Celtics when they meet in game four of the NBA finals in Boston on Saturday morning (AEST). The Celtics lead the series 2-1. Exciting stuff.

It’s an even bigger weekend for …

Greg Norman, the well-tanned face of the controversial Saudi-backed LIV Golf Invitational series, which started at Centurion Club just outside of London overnight. Tiger Woods won’t be there after refusing to sell his soul to the rebel tour for an amount, according to Norman, that was “mind-blowingly enormous — we are talking high nine digits”.