If being condemned their hotel rooms again wasn’t bad enough, Penrith players were asked to do something akin to eulogising their own funeral.

Maybe out of boredom, maybe because they’re one of the most creative clubs in the NRL, the Panthers sat some of their hobbled stars in front of a camera and asked them to give Nine their thoughts on what was unfolding on the television. Their insights were great, but what they were watching was harrowing.

So, is the NRL title race dead?

Because the way Craig Bellamy’s Storm are humming, you would be hard pressed making an argument anyone can stop them going back to back. The team supposed to be their biggest threat, admittedly missing a treasure trove of stars, were ruthlessly buried in a first v second grand final rematch at Suncorp Stadium on Sunday.

The final score was 37-10. It might have been more, the Storm barely shifting from second gear as they opened up a two-point gap in the minor premiership race and won their 16th game on the bounce, a new club record.

The old adage of having to lose a grand final to win one might ring true, but luck is running low for the black cats. The injuries that weren’t there in 2020 are piling up. It could be viewed as a blessing their State of Origin players Nathan Cleary, Isaah Yeo and Brian To’o are freshening up. 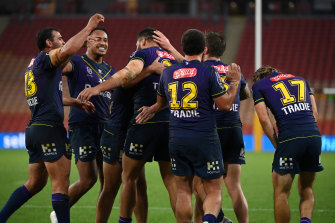 But how good will Cleary’s shoulder be when he returns? And surely there’s no way Penrith can beat Melbourne without him?

In the same week coach Bellamy and fullback Ryan Papenhuyzen signed long-term deals to stay in Melbourne, the heavyweight fight was nothing like was being billed a month ago.

It was almost easier to list who was available for the Panthers, rather than who wasn’t. But with no Cleary, Yeo, Api Koroisau, James Fisher-Harris, To’o, and Tyrone May, never has a top-of-the-table clash looked so lopsided.

And it’s never been so quiet either, the match shorn of a crowd due to Queensland’s snap three-day lockdown to contain a virus outbreak. There was certainly not going to be any Hand of Kikau moments like round three, when the massive back-rower miraculously held up Justin Olam in a match-winning tackle after the siren.

It was the last time the Storm lost.

They were never going to lose this game, and certainly not after leading 18-0 at half-time. The Storm even had time for some party tricks, Josh Addo-Carr outrageously kicking across the field for fellow winger Dean Ieremia to score a try.

The only blemish for Bellamy was the sight of Sharks-bound star Nicho Hynes leaving the field with a leg injury … only to be replaced by Clive Churchill medallist Papenhuyzen. Hynes would later jog back on and Harry Grant made his return from a hamstring problem, as if they needed to get any better.

Tevita Pangai jnr will join the Panthers this week, and it may be the most astute signing Ivan Cleary has made as his Origin-weary contingent try to muster the energy for a surge on the eve of the finals.

Grant scooted over from dummy-half before Ieremia had time to cap his first NRL hat-trick.

Never miss a medal or great sporting moment with our Olympic update emailed daily. Sign up for our Sport newsletter here.