Home » Rugby League » ‘It doesn’t faze me’: Munster happy to be off the drink as DCE pays tribute

As a group of Queensland Origin players sat around a circle beneath Accor Stadium, enjoying some cold cans of XXXX, Cameron Munster did not flinch.

Munster had just been named man of the match but not for a second was he tempted to celebrate with a beer, something he has done after every Origin game until Wednesday’s 16-10 win.

The longer Munster has been off the grog the easier, he says, it has become to go without a drink.

Every Queensland fan should be thanking the Melbourne Storm for slapping a 12-month alcohol ban on Munster late last year as part of his punishment for the white powder scandal.

“It has been easy, it doesn’t faze me to have beers any more,” Munster said.

“I haven’t had an urge or feel like I am missing out on anything. I can still enjoy my life and have a good time without having a beer. 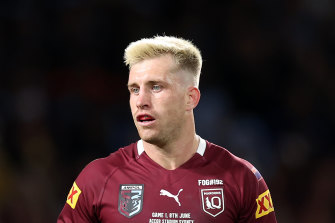 “Everyone is really good about it. When Alf [Allan Langer] gets a couple of drinks into him, he wants his little buddy back. But everyone has been supportive.”

Munster stood up when the Maroons needed him most, and produced a stunning one-on-one strip on Stephen Crichton when the Blues pressed for more points.

Even his Queensland teammates have noticed how Munster has been sharper and more involved with the group.

One person who benefits the most from Munster’s input is skipper Daly Cherry-Evans.

Cherry-Evans said the only thing Munster got wrong on Wednesday night was talking him into a challenging Jack Wighton’s first-half slap across the face.

“I don’t want to throw him under a bus, but put that down to the Cam Munster effect,” Cherry-Evans told the Herald.

“He had me convinced something had happened. I didn’t even know what I was challenging. He said, ‘send it up mate’, so I backed him. It was a love tap at best.

“I love playing alongside him, I love the special moments he brings to the team, and what I love most about Munny is he brings our team together during the week. He’s the larrikin, the funny guy, the glue.”

As for any challenges posed by the presence of alcohol in camp, Cherry-Evans said: “Booze is such a small part of rugby league now, he’s not missing out on much to be honest. He might miss the odd hangover. We’re in camp 10 days and there’s a lot of tine to connect with people if you’re not having a beer. He’s found the right balance off the field.” 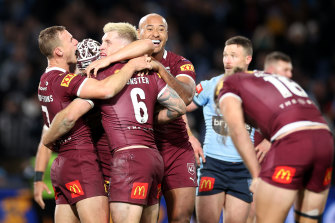 Even Storm and Queensland teammate Harry Grant, who copped a second-half spray from Munster for throwing a wayward pass, said: “It’s great for Mun to have that stability off the field. He’s getting the rewards.”

Meanwhile, Cherry-Evans said the absence of his injured Sea Eagles teammate Tom Trbojevic was a clear boost to Queensland’s Origin hopes, not to mention the snubbing of his older brother Jake.

“Tommy was the player of the series last year, we’re not naive to know he’s such a big part of the Blues at the moment,” Cherry-Evans said.