Wests Tigers captain James Tamou and fellow forward Luciano Leilua have come out strongly in support of Michael Maguire on the same day Maroons coach Paul Green stepped down from his post in a bid to return to the NRL.

The joint-venture outfit is undertaking a review after the side slumped to a 13th-placed finish in a season that ended with a 38-0 defeat to wooden-spooners Canterbury. The pressure is on Maguire after the Tigers missed the finals for the 10th successive year, despite the fact the premiership-winning coach is contracted for the next two seasons.

However, Tamou and Leilua are adamant that the Kiwis mentor retains the support of the players and should still be given the chance to turn around the club’s fortunes.

“As far as Madge goes, you see these things all the time; you read that the coach has lost the playing group. But in our case it definitely hasn’t happened with the players and Madge,” Tamou told the Herald.

“In terms of players not listening to the words that Madge says, that’s far from the truth. When we left Brisbane, everyone gave Madge a handshake and a hug to say that we’ll be in touch whenever you need.

“I understand we’re in a results-driven business and you want results now. But I’ve been in a team where Penrith, in 2019, we came 12th or 13th and lost about seven in a row. Come the 2020 season, Jimmy [James] Maloney left and no one gave us a hope – and then we played in the grand final. 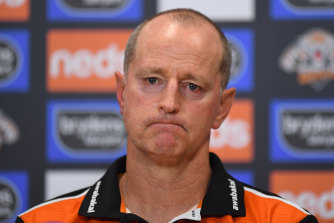 “I’ve been a part of that and that’s what I see at the Wests Tigers. You need cohesion for a team to be successful. Everyone wants results now, but it just doesn’t happen like that. You need to be in a system playing with each other for a long period of time to understand how people work.

“I think this year hasn’t been a total write-off. We’ve unearthed some talent and the boys now understand what it means to play first grade week in and week out.

“As far as throwing support behind Madge, I’m all for it.”

The Tigers are under pressure to make changes after another disastrous season in which they conceded the second most points in a season in the club’s 22-year history. The club has been criticised for not being able to sign established players, but Tamou and Leilua – both internationals – shifted to Concord to be coached by Maguire.

“I don’t see the sense of packing Madge on his way, bringing in someone else and us having to start all over again.”

“I was sort of known as being a bit lazy, but he transformed me into a consistent 80-minute player. The boys in the club love his coaching. He cares for us, he’s done a lot for my family as well. I definitely hope he stays with us, I want to continue playing under him at the Tigers.”

Green wants to return to NRL coaching, an ambition at odds with the QRL’s desire for their clipboard holder to be committed to the Maroons full-time. However, the move is not related to the speculation about Maguire’s job; the club is still to decide whether to back or sack him.

“I don’t see the sense of packing Madge on his way, bringing in someone else and us having to start all over again,” Tamou said.

“This year hasn’t been a complete write off, the things we’ve learnt will be taken into next year. I know next year will be a lot better. It makes no sense to start all over again.”