Home » Rugby League » ‘It was a deal maker’: Fittler repays the favour after Moses helped him land Blues job

Mitchell Moses played a huge role in helping Brad Fittler land the NSW Origin coaching job, which is why he was so delighted to repay the favour and hand Moses his first-ever Blues jersey.

Fittler said the success he enjoyed at the 2017 World Cup with Lebanon, and Moses as halfback, was looked upon favourably by Blues officials when he was appointed to the NSW job at the end of that year. 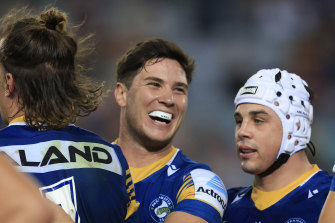 NSW Rugby League boss Dave Trodden confirmed the Lebanon performance was not lost on them when trying to settle on Laurie Daley’s successor.

“That Lebanese campaign certainly didn’t do Freddy’s chances any harm in relation to his quest to get the NSW job,” Trodden said.

Moses was 23 at the time of the World Cup and Fittler’s best two memories involved a pre-game jersey presentation the Eels playmaker delivered to his friend Jason Wehbe, and his chip-and-chase try in a game against France that secured the Cedars’ an historic quarter-finals berth against Australia.

“We got along extremely well, Mitchell and myself. He’s passionate about what he does, which always helps,” Fittler said.

Moses was given the nod to replace the injured Nathan Cleary in the NSW No. 7 jersey to partner Canberra’s Jack Wighton in the halves. Also considered were Souths halves Adam Reynolds and Cody Walker, but Fittler was mindful of relying too heavily on any Souths blueprint and sticking with the Blues’ style of play.

Now 26, Moses has often been accused of failing to stand up on the big stage, and while next Wednesday’s game, most likely at Newcastle’s McDonald Jones Stadium, is a dead-runner, trying tell Moses the game means nothing. 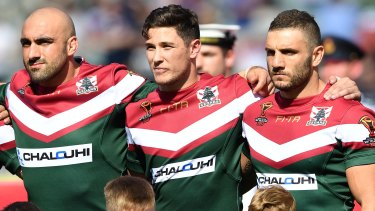 “To be able to ring him and tell him he has the opportunity to play for NSW, I was extremely grateful and I got a lot of confidence out of his response,” Fittler said.

“He sounded clear and he sounded confident. He was ready to go. I think he knows what is ahead of him. It is not going to be easy. I feel like he is in a really good head space to take it on.

“I have spoken to ‘Joey’ [Andrew Johns] a fair bit. I am always talking to him about Parramatta and Mitch and Dylan Brown especially. I will definitely speak to Joey this week, and I will be speaking to Nathan Cleary as well and getting some feedback from him on what he thinks will work for us. I will be listening as much as possible over the next week.”

Moses has a big kicking game and leads the NRL for setting up tries through kicks, but good judges have noticed he does not push up in support every play like Cleary. Fittler, however, said Moses was still young enough to learn that.

Wighton has won the Dally M Medal last year but has struggled for form in a battling Canberra side this season. He also just welcomed the arrival of his third child, son Kayce, but Fittler was still happy to give him the starting role after coming off the bench in games one and two.

“He’s a whole-hearted bloke, at the moment it’s not working that well at the Canberra Raiders, so you start to question what you’re doing and how you’re doing it, so hopefully by game day he’s not questioning anything,” Fittler said.

After Daniel Saifiti was ruled out with a rib cartilage injury, which he suffered in the opening minute of Newcastle’s big win last Saturday, Dale Finucane was promoted to the bench while Eels skipper Clint Gutherson and Wests Tigers’ prop Stefano Utoikamanu were added as 19th and 20th men.