Jack de Belin has spoken for the first time since the infamous Paul Vaughan house party which threatened to bring the NRL to a halt, declaring “I will do everything I can to pay back the faith”.

In a series of apologies posted to the Dragons website on Wednesday, de Belin and 10 of his teammates expressed their regret for attending the barbecue, which resulted in 13 players breaching public health orders and NRL biosecurity protocols.

De Belin’s involvement has been the most heavily scrutinised, only a month after he was cleared to return to the NRL after a second jury couldn’t reach a verdict on aggravated sexual assault charges.

He wasn’t one of the 12 players who were initially fined by NSW Police for not adhering to state government’s regulations, but came forward and admitted he was at the gathering the following day. The 30-year-old was also fined $42,000 by the NRL and faced club-imposed sanctions, believed to be a fine of a week’s pay.

He allegedly hid under a bed when police arrived at the Shellharbour home of Vaughan – who had his contract torn up by the Dragons – after a noise complaint from a neighbour.

In his message on the club’s website, de Belin said: “I just want to apologise for my actions the previous weekend for attending the barbecue at Paul Vaughan’s. 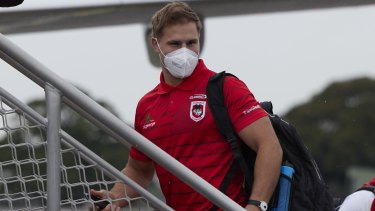 Jack de Belin boards a flight to Queensland with his Dragons teammates on Wednesday.Credit:Brook Mitchell

“For someone like myself it was a poor decision. I shouldn’t have been there and I’m deeply regretful and sorry for my actions. I see how much of a strain it’s putting on the community at the moment and for me doing that, it just wasn’t good enough.

“From here on I’m just going to be doing everything I can to pay back that faith.”

Daniel Alvaro is the only Dragons player yet to make comment given he has been banned from returning to the St George Illawarra bubble because he hasn’t signed a sworn statement from the NRL, along with Lomax.

The other 10 players have all signed the document and travelled with the team to Brisbane on Wednesday. Lomax and Alvaro stayed in Sydney and will leave for Queensland at a later date before completing a further two weeks quarantine away from their teammates.

“I’m truly sorry for my part in everything that went down,” Dufty said. “We know how badly we messed up and we’re truly sorry. For me personally, it’s not who I am as a person and I’d like to say sorry again.”

Dufty, Fuimaono and Ellis will all serve their one-game bans imposed by the NRL when the Dragons take on the Sea Eagles on the Gold Coast on Friday night.

Manly coach Des Hasler said he will rest Tom Trbojevic from the match after the State of Origin series finale on Wednesday night.