The football world is counting down the eight goals Lance Franklin needs to reach 1000, but for the man himself it’s the 1085 days since his last final spurring him on to a September to remember.

Franklin’s last foray into football’s big time was not a happy one for him or his team. Severely restricted by injury, the greatest forward of his time was held goalless by long-time foe Phil Davis, and the Swans embarrassed by their crosstown rival the Giants.

For much of the past three years it seemed like that would be it for Franklin in terms of taking part in the most important month of the football calendar, as he battled injury and his club geared up for its next premiership tilt with a new breed. It would have been an inglorious finals swansong.

Ideally, this game would be taking place in front of a heaving full house at the SCG, but Tasmanians have not passed up the opportunity to witness history on Saturday.

The state’s pride at selling out tickets for both elimination finals – even one between two Sydney-based clubs – at Launceston in a matter of hours is evident.

“Tasmanians have proven today that if you bring the big matches to our State, Tasmanians will turn up,” the state’s Minister for Sport and Recreation Jane Howlett said. 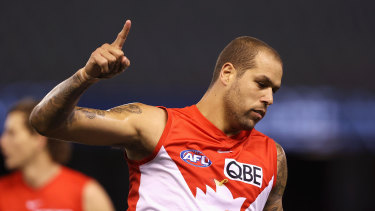 The chance to see Franklin’s 1000th is no doubt the main attraction, but for the superstar forward his motivations are not on individual milestones.

“Absolutely not,” Franklin said in an interview with the Swans’ in-house media team on Tuesday. “There’s a lot of talk about it but for me, it’s about winning. My focus is on this final. Winning, competing and doing our best to get the win.”

The Swans are also focused on the main prize, keeping their marquee man away from the press as he closes in on membership in one of the game’s most exclusive clubs.

This time last year, Franklin’s fabled career was at the crossroads. Ruled out for 2020, he nevertheless travelled with his teammates, abiding by onerous COVID protocols as he embarked on a meticulous training regimen to get back on the field.

There were no guarantees the program would work, but it was his best chance of getting to what he loved most.

“Missing a full year of football was disappointing,” Franklin said. “That hunger has always been there to get back and play consistent football. I think I’ve been able to do that this season.

It will be a vastly different Swans team that runs onto the field with Franklin to that of the corresponding game in 2018. There could be 10 finals debutants to face the Giants, possibly more if Callum Mills does not overcome his Achilles tendonitis in time.

“The biggest thing is nothing should change with the way you go about it and the way you play,” Franklin said. “I think you keep it nice and simple, prepare really well, go out there and have fun. The most important thing is just enjoy what you do, and it should take care of itself.”