Home » ‘It’s OK to be different’: How Saints skipper Steele found his niche

An introvert, the Saints co-captain never saw himself in that role. But after a career-best year in 2020, when he won St Kilda’s best and fairest, made his first All-Australian team and finished equal third in the Brownlow Medal, Steele was elected to lead alongside Jarryn Geary.

“I have always struggled with self-belief,” Steele told The Age. 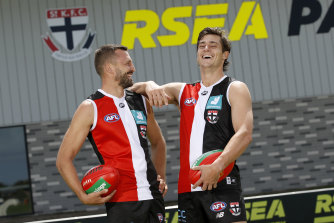 But one person who has always believed in Steele? His co-captain.

The older, more vocal of the two captains knew Steele was something special when he kicked his first AFL goal on Geary during his time at GWS.

It was an early afternoon game on a Sunday, in front of less than 10,000 people at the venue then known as the Sydney Showgrounds, when Steele drifted forward.

Geary, as he so often does, rose above the pack and threw his fist at the footy. But he couldn’t get through the hands of Steele.

“He reckons he got a good piece of it as well,” Steele laughed. “Since then I think he’s had quite a bit of faith in me.”

It hasn’t been smooth sailing this season for the Saints. And since Geary broke his leg in the pre-season and having recently suffered complications, Steele is essentially the skipper on his own.

Things weren’t looking good for the Saints after being thrashed by Essendon, with just one win from their first three games.

“Initially ‘Gears’ was going to be out for three weeks, then it went to six weeks – or something along those lines. When things weren’t going well I thought, ‘Shit, I need him back’. Just to take a bit of load off me, but at the end of the day he’s still there,” Steele said.

“I felt responsible [for the losses]. He’s played a lot of footy, so just to get that calm leader back out there was something we really needed. I felt a bit under the pump last week.”

But what Steele quickly worked out is that he didn’t need Geary on the field to be kind of captain he wanted to be.

The pair has been catching up regularly away from the club, at cafes such as Jerry’s Milkbar in Elwood – a local of Steele’s – to talk about leadership and life.

The Canberran is far more introverted than Geary, but it’s Geary himself who has moulded Steele into the leader he is today.

“I never thought about [being captain], just because of how quiet I am,” Steele reflected.

“I’m not a big talker. Whereas ‘Gears’ is a talker, Rooey [Nick Riewoldt] was a talker and Phil Davis at GWS was a talker. So I pigeonholed a captain as being someone who is loud and articulate, so I never thought I’d be in that position.

“But as the years went on and I started playing better footy, people started telling me more and more how much they respected me.”

It was Geary who told Steele to embrace the person he was and not to try lead like he was someone else.

“He said: ‘it’s OK to be different,’” Steele said. “He always showed a lot of faith in me, not just in my leadership but in my ability. For a lot of my career, I have had belief issues in myself. He’s been one constant person and teammate that’s believed in me since I got to the club.”

The advice has clearly worked. Not only is Steele now playing and leading tremendously well, he’s also found himself at the centre of a booming art collection.

‘He always showed a lot of faith in me, not just in my leadership but in my ability.’

Talented young Melbourne artist Dom Gauci, at just 27, has partnered with the AFL to create her latest collection of hand-drawn sketches of some of footy’s biggest stars.

The range includes the likes of Patrick Cripps, Marcus Bontempelli and Scott Pendlebury and in the case of Steele, she trawled through nearly 4000 images before finding the perfect snap.

“Look at him, he’s in the moment. For me, this is about capturing the player in their glory or in a moment of significance so that way whoever buys it and puts it on their wall can relive it,” Gauci said.

Steele has been a fan of Gauci’s ever since he bought a large portrait of former rapper Mac Miller and hung on it on his bedroom wall.

Perhaps Miller OUT, Steele IN at his house in Brighton? “It’s not like I’m going to put up a portrait of myself!” (This one will be going to his parents.) 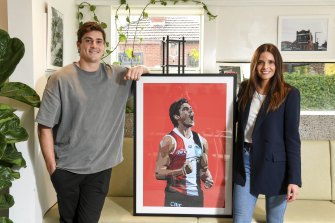 While a dramatic come-from-behind victory against West Coast helped put the Saints’ season back on track, Steele’s side now faces the daunting prospect of Richmond on Thursday night, who will have a sting in their tail after consecutive defeats.

Steele admits while it’s only one game, a victory over the reigning premiers could be the launch pad the Saints are looking for.

“We’re still trying to prove a lot of people wrong who had written us off after our loss to Essendon. That commentary is hard to avoid. For me, I used it as motivation,” he said.

“In a way, it was almost a free hit. If you lose, you’re in the same position as you were in before. If you win, you get some people back on your side.

So after such a stellar individual year in which St Kilda finally won a final, what drives Steele now?

A premiership, he says, is the obvious answer. But he wants more.

“I was watching [Geelong captain] Joel Selwood the other day, and they said that of his 14- or 15-year career, he’s not missed finals once. It would be pretty cool to be a player like that, to not so much will my team over the line but just be a constant finals contender.

“Last year was good for us and we were happy with our year, but we need to go again. It can’t just be a one-off. ”