Former Channel Nine boss and AFL lawyer Jeff Browne has gone public with his wish to take over Collingwood in a bloodless coup.

Browne wants to replace Mark Korda as Collingwood president, with four of the seven-member board replaced by him and three of his allies. In Browne’s plan, three of the board members would remain. 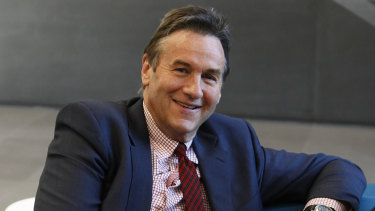 Browne, who has already spoken to Korda, has said he would approach the Collingwood president with a plan for a transfer of power of the Magpies.

Browne told Newscorp the four new positions would include himself “and three high-quality candidates”, and then he would seek the backing of the new hybrid board to become president.

Browne’s ticket is expected to include a woman and have directors with particular skill sets.
“In an effort to achieve change in the least disruptive manner, I intend to speak again with Mark Korda, to seek an immediate four vacancies on the board,” Browne told News Corp.

Browne said that should his offer be rejected, he and his group would wait for members to force a spill of the seven-member board at an extraordinary general meeting.
“I am prepared to negotiate in good faith, which three members of the current board of directors are most suitable to contribute to a reconstituted board and some continuity of operational knowledge is desirable,” Browne said.

The long-time Collingwood member who organised the signatures for an EGM, David Hatley, said he would wait to see what transpired in talks between Browne and Korda before he and his fellow members made their next move.

Browne already has the backing of influential ex-Collingwood players Craig Kelly and Peter Moore, the father of current player Darcy Moore, and clearly has the support of his close friend, Eddie McGuire, whom Korda replaced as president.

“We’d be keen to see what happens between Browne and Korda,” said Hatley, who gathered enough signatures to call an EGM which could spill all seven board spots.

“We’ll see what plays out and make our decision.

“If Browne’s willing to have a fresh election (of the whole board)….it’s sort of the same (as an EGM).”