Inside the dressing rooms at Central Coast Stadium last Friday night, in the aftermath of the Dragons’ golden-point victory against the Warriors, one player asked the club to organise an old-fashioned bonding session for the following night.

The suggestion put forward was to open the doors to WIN Stadium, the club’s Wollongong training base, for a barbecue and a few drinks to celebrate the win before the players enjoyed some time off for the bye round. For the record, it wasn’t Paul Vaughan who asked. 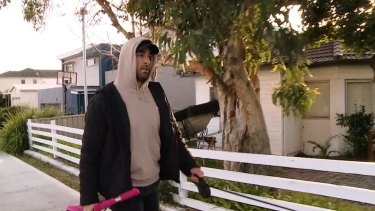 Paul Vaughan walking through his neighbourhood on Tuesday.Credit:Nine News

Given the players are together most days at that very venue, it seemed a reasonable proposition for the players to avoid breaching state government and NRL protocols while enjoying the good time they felt they had earned.

But as coach Anthony Griffin and general manager Ben Haran pointed out when they addressed the group in the sheds at Gosford, how were 20-odd intoxicated players – who live in different postcodes from Mascot, Campbelltown and Gerringong – meant to all get home without breaking any rules?

Under the NRL biosecurity bubble, players are not allowed to use public transport, taxis or Ubers.

"Enjoy your five days off but just stick to the rules," Griffin told the players. "We'll do something when all of this is over." 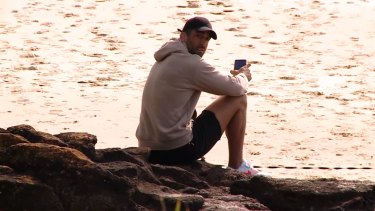 Paul Vaughan at the beach on Tuesday after being sacked by the Dragons for hosting a house party on Saturday.Credit:Nine News

Little did the club know that later that night Vaughan texted a small group of players, which would later spread to the majority of the team, to notify them of the barbecue he had decided to host the next night despite the club's strict orders.

None of the officials at the Dragons suspected anything at the time. Then Haran's phone rang just before 10pm. It was one of the players alerting him to the events that had just transpired.

A noise complaint, made by a neighbour, resulted in police arriving at the 30-year-old's Shellharbour property.

It is understood fullback Matt Dufty was out the front of the house on the phone when police cars arrived. He ran five kilometres to his nearby home. His car remained outside Vaughan’s property on Tuesday.

The other players dispersed, some upstairs and some outside, to avoid the police. Corey Norman wasn’t anywhere to be seen, but personalised number plates of a vehicle outside left officers certain he was at the party. Jack de Belin hid upstairs, with suggestions he was under Vaughan’s bed.

On Sunday morning, after club director Craig Young provided the NRL integrity unit with preliminary information, the club organised a group Zoom meeting with all of its players. By this stage some players had confessed to their presence at the party, but it remained unclear how many were there and if anyone from outside the club had been there too.

The club didn’t want to name and shame in front of the group, so they asked all those who attended Vaughan’s get-together to contact the football department at the conclusion of the Zoom call and be honest to help the club move on.

Jack de Belin never made the call. And his teammates didn’t name him either. Behind the scenes, using Zoom calls, players corroborated and manufactured stories to protect de Belin, who recently had rape charges dropped after a three-year legal battle. 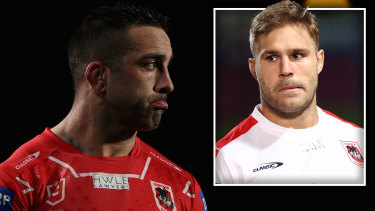 Unfortunately for de Belin, he was spotted by Vaughan’s neighbours, which was relayed to the media. Suggestions he was only there to drop off a case of beer and leave prompted further investigation by the club and NRL into de Belin’s whereabouts on Saturday night.

The NRL integrity unit, sceptical about what it had been told by some of the players, held a second round of interviews. The stories seemed co-ordinated and consistent, but there were cracks in the details.

It was the thoroughness of the investigation that led to de Belin turning himself into police and accepting the $1000 fine for breaching the NSW public health order.

The NRL then hit the players with a whopping $305,000 worth of fines. Twelve Dragons received a one-game ban, while Vaughan was rubbed out for the rest of the year. Those sanctions would have paled into insignificance had people from outside the bubble been at Vaughan’s house.

An emergency board meeting called by the Dragons for the next morning suggested the worst wasn't over.

The directors, as well as coach Anthony Griffin, gathered on their computers for a virtual board meeting where it was unanimously decided enough was enough.

Vaughan allegedly received his first strike two years ago after sending lewd images to a woman in Canberra in a sexting scandal, the Herald revealed on Tuesday.

His second strike came on the day of a game against the Roosters last year when he was spotted at a cafe in breach of NRL COVID-19 protocols and subsequently stood down for 14 days. He was told at the time that a repeat infringement would put his contract in jeopardy. Then disaster struck on Saturday night.

Just a few hours before players began gathering at his property, Vaughan did an interview on Triple M and made a number of jokes about his salary, which was published over the weekend as part of a News Corp investigation into the top 100 NRL earners.

“I’m a battler. Overworked and underpaid,” he joked, unaware of the events that would soon unfold that would lead to the termination of his contract with the Dragons, which still had about $1.1 million to be paid in the next 16 months, and a $50,000 fine from the NRL.

"I can’t believe what they’ve given Zac Lomax. That’s a bit of a gee-up. He shouldn’t be earning that much."

What came next has since been construed by some as a potential slip-up into what he was organising in the background with his teammates.

"I will have a couple of …" Vaughan said, presumably in relation to what was being planned for the evening.

"Oh," he then said before stopping and changing the tone of his sentence.

He went on to admit that he planned to go to market in November for 2023, likely aware the club was trying to shop him to other clubs despite recently taking up an option to stay at the Dragons for next year.

"I'm off contract next year, so if anyone wants to pick me up?" Vaughan said.

"I'm coming up to my fifth year at Saints, it's been a hell of a ride."

He had no idea the worst was just about to unfold.