Home » Rugby League » ‘Like JT with Ponga’s skill set’: Why Walker’s ready for the NRL

The Sydney Roosters’ sales pitch to teen sensation Sam Walker started on a Thursday night. Walker and his parents, Ben and Kylie, flew down from Brisbane to watch the defending premiers dismantle the Broncos at the SCG at the start of the 2019 season.

The 16-year-old kid had generated so much interest that Canterbury, South Sydney, Gold Coast, North Queensland and Super Rugby’s Queensland Reds were also chasing hard for his signature. 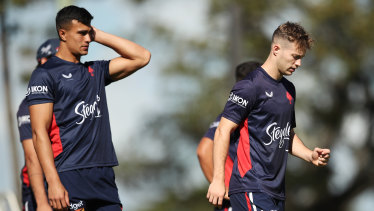 Sam Walker, right, will make his Roosters debut on Sunday while Joseph Suaalii, left, waits in the wings.Credit:Getty

By the time Walker hopped into an Uber and headed to the airport, he knew he was going to be a Rooster.

South Sydney was once the home of Walker’s father Ben and his uncle Shane, but they were one of the first clubs to pull out of the race.

Sam met with former Bulldogs boss Andrew Hill and football manager Steve Price in Sydney. He also flew to Townsville for talks with the Cowboys, made a quick stop on the Gold Coast to listen to their interest, while the Reds’ Sam Cordingley and Rugby Australia’s Scott Johnson visited Walker in his own Ipswich backyard. 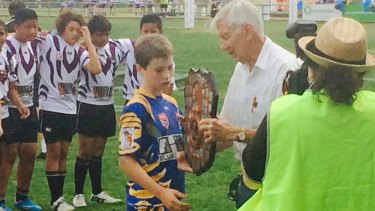 A young Sam Walker collecting some silverware after an under-12s grand final.

Sam was handed his first Broncos scholarship when he was just 12. After he returned from his hit-and-run trip to meet the Roosters, he listened to what Brisbane had in mind. They let him slip through their fingers, a decision that will haunt the Broncos for the next decade if the young playmaker lives up to the hype.

That future starts on Sunday. Ben and the family, including his three younger siblings, flew to Sydney from Brisbane before the latter went into its snap COVID-19 lockdown at the start of the week. The Sun-Herald understands Ben presented Sam with his jersey on Good Friday.

A giant entourage will be at the SCG, including Bulldogs recruit Corey Allan, whose sister Bella is Sam’s girlfriend. 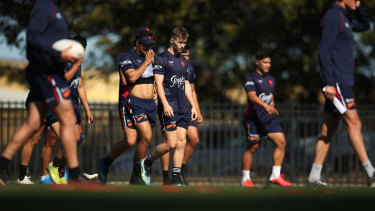 Given his father and uncle played for Souths, it prompted one family member to offer: “His dad finished at Souths, Sam was a bit of an oppositional child, so he wanted to support the club Souths hated the most.”

Walker grew up with rugby league. He hung around Ipswich Jets training sessions where Ben and Shane successfully coached for more than a decade before Ben departed at the end of 2019. By the time he was 14 Sam was running at halfback in opposed sessions against players like Ben Hunt and Ben Hannant.

With Keary out for the remainder of the season with a ruptured anterior cruciate ligament, Walker will get the chance to shine without the pressure of having to keep his spot.

But the Roosters aren’t worried about the teen handling the big step up.

A good judge at the club told The Sun-Herald: “He’s very on the ball like a Johnathan Thurston, but with Kalyn Ponga’s skill set. He’ll definitely change the way the game is played.”

No pressure then. Fullback James Tedesco says it’s something Walker will be able to handle.

“He’s a gun, he’s definitely ready. He’s a small frame but the way he plays and trains at the Bears has really stood out and impressed a lot of us,” Tedesco said. “He’s similar to Keary, he just plays footy and has a great pass and kicking game. The way he runs and plays eyes up footy and executes plays is pretty impressive.

“A lot of the boys get excited when they see what he can do at training.”

It hasn’t been all plain sailing for Walker though. He struggled through 2020, not playing any football last year. He got down to 72 kilograms. His high-profile housemates, rugby sevens golden girl Charlotte Caslick and her partner, Melbourne Rebels star Lewis Holland, played a big role in making sure he did not toss it all in and return home.

But he is going nowhere. Walker is off contract but set to extend his time in Bondi. He told the Herald last month: “I think I’m ready, definitely. I’ve learned a lot about my game … that COVID break in the long run will be beneficial for me. I’m trying to focus as much as I can on playing good footy.

Expect Roosters fans to quickly fall in love with him.