St Kilda coach Brett Ratten told his players to brace themselves for criticism after an embarrassing 75-point loss to Essendon that saw them also lose midfielder Jade Gresham for the rest of the season with an Achilles injury.

The Saints were never in the hunt, with their defensive pressure non-existent and Ratten indicated some honesty sessions might be ahead of the group as he prepares them to respond. 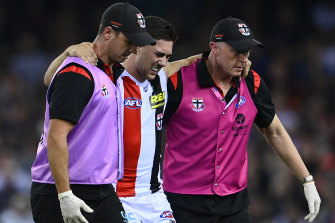 Jade Gresham is helped from the ground by trainers.Credit:Getty Images

He described their effort as “hard to watch” and “a wake-up call” with the loss leaving them with just one win after three rounds.

They are now staring down the barrel with games against West Coast and Richmond in the next two rounds.

“When you perform like that you open yourself up to criticism. You can’t have the pats on the back when you are going well and you can’t expect to not get a bit of a backhander when you go poorly,” Ratten said. “I said ‘be ready for it because it’s coming our way’.″⁣

However the coach said he was confident that, despite the potential for them to lose trust in each other after such an effort, it might provide them with a turning point. 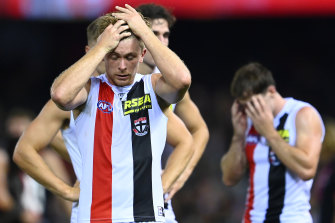 “It does tell you a bit about your group where you go from here and how you respond. We have to stick together,” Ratten said.

“The only way we can get through a performance like that is to get closer and maybe be a bit more honest.”

He said the most disappointing aspect of the loss was their work around the contest.

“We didn’t even challenge them defensively,” Ratten said. “Defensively, that is as bad as we have been. It was hard to watch.”

The inability to lay tackles and stop Essendon from surging forward was evident, with Ratten saying the players weren’t the only people embarrassed with what transpired.

“I was embarrassed too. I’m the leader of this team and I am the coach so it comes back to me, yeah I think everyone was embarrassed and everybody should [be embarrassed]. You feel for our supporters to dish up that,” Ratten said.

He said he had identified the remedy with the mindset needing to change to improve the defensive system. 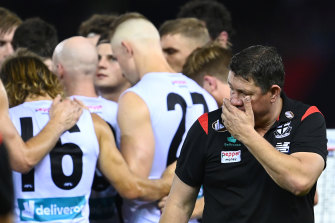 Brett Ratten and his players.Credit:Getty Images

Their ball use was also ordinary but Ratten said he suspected their manic approach may have been driven by the scoreboard, which affected their composure.

Apart from losing Gresham, Zak Jones may be in doubt after rolling his ankle and Ratten said they needed to have a conversation about whether ruckman Rowan Marshall – who played in a VFL practice match on Saturday – would be available.

Meanwhile, Essendon coach Ben Rutten said he was pleased to record his first win as senior coach although the performance did not surprise him as much as external observers.

They now face the challenge of backing the win up with a strong effort in just five days’ time against an in-form Sydney next Thursday night at the Sydney Cricket Ground.

Rutten said Dyson Heppell was a chance to return as he was training after suffering back issues leading into round two but the Bombers may lose Mason Redman after he was subbed out of the game with a hamstring injury.