Much has been made of the impact Tom Trbojevic has on Manly, and now the club’s two star playmakers have done their best to explain exactly how much “Turbo” improves the Sea Eagles.

Daly Cherry-Evans and Kieran Foran loved every minute of Trbojevic’s brilliant return against the Gold Coast last week as Manly romped to a 36-0 win, and expect another “10 out of 10 performance” against Wests Tigers on Sunday. 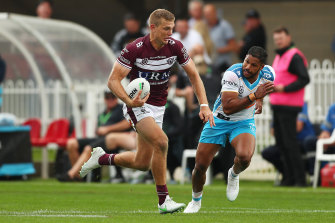 Tom Trbojevic bursts into the clear on the way to scoring a try against the Titans in Mudgee last week.Credit:Getty

Cherry-Evans said when it came to Trbojevic, the biggest thing was his ability to convert half chances into scoring opportunities.

“With some fullbacks, all you have to do is give them an opportunity and they will finish it,” Cherry-Evans said. “It was the same with [Manly great] Brett Stewart. You’d do your little part and he’d make you look good. It’s the same with Tommy.

“Last weekend attack-wise, I know he had his hands all over the game, but for me the best fullbacks leave their mark defensively, and it was no coincidence the week he came back we didn’t allow them to score a point.”

Cherry-Evans played with Stewart, as well as Billy Slater and James Tedesco in the representative arena, and declared Trbojevic would finish his career in that same elite company.

Foran said like all the great players Trbojevic was always “three plays ahead” and knew what was about to happen in the game.

“He understands the flow of a game and really has a feel for it,” Foran said.

“When you play with someone as good as Turbo, you try to create a bit of space for him on the outside and he will then either show and go and slice through the defence with his blistering speed, or dig into the line and come up with the right pass selection. 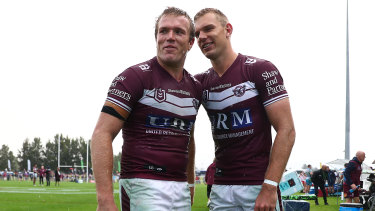 “His communication is also second to none. He gets out there and just produces 10 out of 10 performances every time he steps on to the field.

“You can also see the impact he has on Jake [Trbojevic’s] game as well. Jake feels so much more comfortable when Tom is pushing up inside and outside him. I’m not too dissimilar and when I know he’s swinging out the back, he’ll turn something into a linebreak or a try.”

Trbojevic injured his “good” hamstring during a freak bathroom accident before the season kicked off and is desperate to finally put a shocking run of injuries behind him, most notably ongoing hamstring issues.

The Bankwest Stadium clash against Wests Tigers will also feature former Tigers prop Josh Aloiai going up against his former club after a sudden and messy exit from the joint venture. Aloiai took aim at Tigers management when chairman Lee Hagipantelis declared there would be no early release and they would make him “mow the lawns at Leichhardt or Campbelltown or paint the change rooms at Concord – as long as he fulfils his contract”.

Tigers skipper James Tamou arrived from Penrith during the summer and said: “When I signed with the Tigers, he was one person I would have loved playing with and a guy who puts everything into his game – he hits like a tank and runs just as hard.”