Paul McGregor might be the forgotten man of the NRL coaching caper but he’s emerged as a key cog in NSW’s Origin shield defence, running intense daily training sessions and the all-important bench rotations on game day.

The Blues finished the second of two all-out field sessions on Friday, the likes of Liam Martin, Angus Crichton and Victor Radley all sitting attacking players on their backside during the week as McGregor marshalled both main team runs.

The former Dragons mentor turned Eels assistant hasn’t rated a mention for any of the vacant head coaching gigs but it’s been McGregor calling the on-field shots leading into Sunday’s Origin II outing, with Brad Fittler observing mostly from the backfield in between regular consultation with players.

A series of game scenarios dominated Friday’s session as the Blues regularly worked to use Matt Burton’s booming left boot on territorial plays, while Crichton and fellow benchman Siosifa Talakai alternated between both edges and the middle. 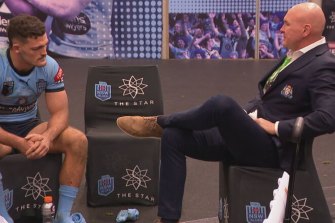 “They look a bit similar but the level of detail and intensity is the same and it’s what we need.

“It has been intense, today’s been short and sharp and we knew it had to be all week after losing game one.

“Mary’s taken charge and Freddy has his say when he wants. He’s a great motivator and he’ll chip in with a couple of conversations, be it one-on-one or as a team.

“Freddy talks with a lot of passion and we take a lot out of that, but Mary does all his hard work you could say.” 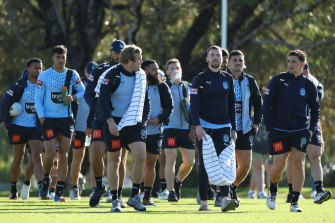 NSW players arrive at the Hale School in Scarborough for Friday’s training session.Credit:Getty

McGregor’s key focus come Sunday night will be managing the bench rotations, an area where Queensland gained a critical advantage during their 16-10 Origin I upset and one NSW hasn’t always nailed in recent times.

Despite losing winger Xavier Coates after 28 minutes and Jeremiah Nanai just after half-time to ankle injuries (though Nanai did return after a painkilling injection), the Maroons enjoyed greater impact from their bench as Pat Carrigan and Lindsay Collins turned in game-changing middle stints.

The Blues rotations were thrown out of whack by Isaah Yeo’s reduced minutes due to a head knock, while Junior Paulo’s 33 metres from a defence-heavy 30 minutes made for his lowest return at any level since his debut NRL season in 2013.

“You can have the best laid plans in the world, but you’ve got to have bench plans for everything else too – HIAs, injuries and what the opposition does,” advisor Greg Alexander said.

“The input comes from across the entire coaching staff and Mary’s the one wearing the headset up in the box keeping an eye on it all.

“He’s best placed to do it because he’s done it at NRL level for not just his own head coaching career, but when he was an assistant too.

“You need to know with all the scenarios, who’s on the field and who’s on the bench of every minute. That’s the chat Freddy and Mary are across especially.”

Watch the State of Origin series exclusively live and free on Channel 9 and 9Now.