A refreshed Moses Mbye has no expectation about his role at the Dragons after conceding he desperately needed a shift from Wests Tigers, who he says are close to bringing out the best in Luke Brooks.

The former State of Origin player is among a host of recruits for St George Illawarra coach Anthony Griffin, and is expected to be used in a utility role, which garnered him representative honours for Queensland.

But after asking for an early release from his big-money contract at the Tigers and then going through an on-again, off-again switch to St George Illawarra, Mbye admits even he’s unsure what role he will play for the Red V.

Junior Amone and Jayden Sullivan are expected to battle it out for the No.6 role alongside Ben Hunt, while Griffin will have strike centres Zac Lomax and Manly recruit Moses Suli as attacking threats out wide. It means Mbye is poised for a super-sub role.

“It’s actually quite refreshing having that open mind about what I’m going to be doing,” he said. “I’ve been training pretty much in every position, and for me it’s just about making the 17 each week. That’s the goal.

“If I can just be fit, be ready and be healthy [that will be great]. In my conversations with ‘Hook’ [Griffin], I’m just willing to learn. He’s such a deep thinker of the game, but in saying that he keeps it very simple for his players.

‘You come up with an impression in your head what you think someone is going to be like, but you’re just not sure.’

“I’d played against his teams before and I had no relationship with him until he got to the Dragons. You come up with an impression in your head what you think someone is going to be like, but you’re just not sure.

“But he just has good expectations of what he wants out of his players, and he lets you know when you’re not living up to those expectations.”

The utility role isn’t new to Mbye. He started at five-eighth, fullback, centre and off the bench under Michael Maguire at the Tigers last year as the 28-year-old compensated for injuries and different strategies. 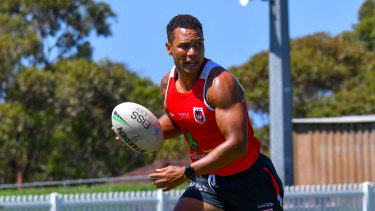 But he knew his time at one joint venture was coming to a close, and traded it in for another. He’s since watched the Tigers rebuff attempts from Newcastle to bring halfback Brooks to the Knights, having played alongside the mercurial No.7 for a lot of 2021.

“You keep seeing guys like Brooksy used as a bit of a punching bag, but he’s just an exceptional player,” Mbye said. “It’s going to take one little thing to unlock him and he’ll be away. He just needed a few more people around him to give him the knowledge and information and he’ll be fine.

“I think what they’ve gone and done now is get some real experienced guys with [Tim] Sheens and [Nathan] Cayless, and I think they’ll be a real threat this year. I think they’re definitely moving in the right direction.

“There’s a really massive crop of young talent at this club. There’s four or five really exceptional juniors through the system and the way they carry themselves with absolute maturity, and they look like they know what they want exactly out of the game while being willing to learn … I’ve enjoyed training besides those guys.”