NRL players will face the heaviest fines in the game’s history under a proposal to more than double the maximum penalty in a desperate bid to deter off-field scandals.

Australian Rugby League Commission chairman Peter V’landys and NRL chief executive Andrew Abdo have tabled the plan, which will make players liable for fines of up to $130,000 – a staggering increase on the current ceiling of $50,000.

According to sources familiar with the situation, players were told about the NRL’s intention to increase the scale during recent club visits, which came after a spate of breach notices for COVID-related offences and improper conduct.

An individual player can’t be fined more than $50,000 under current rules, but the NRL wants to push through a huge increase before the 2022 season.

Senior NRL players spoken to by the Herald are set to discuss the proposal in more detail in coming weeks.

“The maximum fine hasn’t increased from $50,000 for a long time and we’ve been criticised for not having sufficient penalties,” V’landys said. “We haven’t introduced it yet as it is still in the consultation stage. 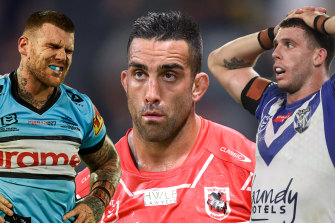 Josh Dugan, Paul Vaughan and Adam Elliott have all been hit with heavy fines.Credit:Getty, NRL Photos

“The maximum fine may never get applied, but if you have a situation where you need it, you should have the right to apply it. Yet if the players don’t do the wrong thing they will have nothing to worry about it.”

Lodge is the latest player to fall foul of the code of conduct, penalised for flipping the bird at heckling Titans fans after he was sin-binned in the Warriors’ implosion at Cbus Super Stadium on Sunday.

Dugan’s penalty was for a second COVID-19 breach in as many months, when he was stopped by NSW Police while driving with a friend near Lithgow.

‘The maximum fine may never get applied, but if you have a situation where you need it, you should have the right to apply it.’

But the sanctions could be far greater if the NRL forces through its proposal.

V’landys showed his intent to clean up concerns about player misbehaviour when he courted NSW Police commissioner Mick Fuller to take a vacant role on the ARLC earlier this year. The NSW government blocked the move less than 48 hours after the approach to Fuller was reported, but V’landys’ motivation was clear.

Former ARLC chairman Peter Beattie floated the possibility of a “punishment matrix” for player sanctions, but the idea was never formalised.

Beattie was responsible for the introduction of the no-fault stand-down rule which sidelines players facing a criminal charge carrying a jail sentence of 11 years or more. They’re not allowed to return to the field until their criminal proceedings have been finalised by the courts.

NRL players have kept their end of the bargain in regard to COVID-19 protocols since the competition relocated to south-east Queensland in July, initially spending two weeks in quarantine and then adhering to biosecurity guidelines.