Dragons star Jack Bird believes the NRL’s crackdown on dangerous contact will do little to deter players from tackling high due to the speed of the game, and was left surprised by the club’s decision not to fight any of the four charges handed down to Red V players following the wild Magic Round clash against Melbourne on Sunday.

The Dragons are preparing to take on the Sharks on Friday without Mikaele Ravalawa, Tyrell Fuimaono, Tariq Sims and Josh McGuire, who are all suspended. The club will also be without Matt Dufty who is out indefinitely with a shoulder injury. 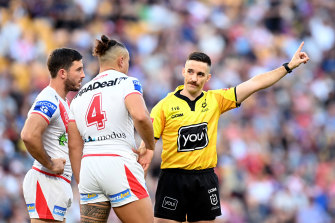 The Dragons are preparing to take on the Sharks this week without Mikaele Ravalawa, Tyrell Fuimaono, Tariq Sims and Josh McGuire, who were all handed suspensions as a result of NRL’s latest welfare edict.Credit:Getty

St George Illawarra general manager Ben Haran said that after seeking advice on each of the four charges, the club decided not to take any to the judiciary due to each player’s prior offences.

“You think you’d try and fight some of them,” Bird said. “But it’s just the NRL now. They’re making up all these rule-changes. As much as I don’t like it, I can’t sit here and complain.”

Dragons captain Ben Hunt said multiple suspensions at this time of year were particularly frustrating given a good run has the club sitting in sixth position on the ladder.

Earlier this year, Hunt spoke out after breaking his leg, which he suggested was partly due to NRL rule-changes speeding up the game.

“I think they’ve gone a bit too far, personally,” he said. “They’re speeding the game up, making things a lot harder for blokes and then expecting us to change the rules and abide by them. It’s a bit difficult all at once, but especially for the big boys in the middle.”

With the Dragons down on troops, 20-year-old Cody Ramsey will get a shot at fullback. Former Dragons centre Gerard Beale re-signed with the club on Tuesday.

Meanwhile, Latrell Mitchell will make his return in the No.1 jersey for the Rabbitohs after completing a three-game suspension. Cody Walker will be shifted back to five-eighth, with Benji Marshall returning to the bench.

Josh Mansour also returns the starting line up against the Panthers, who have named Kurt Capewell to return from a head knock.

Ryan Papenhuyzen will miss the Storm’s clash with Canberra on Saturday after suffering a concussion at the weekend, with Nicho Hynes moving to fullback.

Cade Cust will replace Kieran Foran at five-eighth for Manly, while fullback Kalyn Ponga and winger Hymel Hunt will be sidelined due to injury for Newcastle.

Broncos coach Kevin Walters has dropped Anthony Milford once again. The five-eighth will be replaced by Albert Kelly, who is set to play his first NRL game in seven years, for the match against the Roosters.