The NRL refuses to concede its contentious six-again rule is responsible for a string of blowouts this season as one of the most lopsided Sunday afternoons in the game’s history looms.

Records are set to fall when Manly and Penrith, both $1.01 favourites with the bookies, take on strugglers Canterbury and Wests Tigers respectively. The bookies expect both favourites to win by at least 30 points. 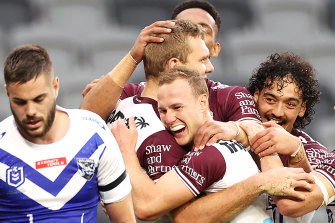 The Sea Eagles smashed the Bulldogs 66-0 earlier this season, and welcome the return of a rested Tom Trbojevic. Skipper Daly Cherry-Evans will also have extra motivation to perform in front of family and friends at home in Redcliffe.

The Bulldogs also had a tough week in the headlines with Adam Elliott stood down and fighting to save his career, while Lachlan Lewis is being investigated by the integrity unit over claims he tried to sell an NRL-purchased speaker on eBay.

Second-placed Penrith are at full strength and will be out for revenge against their bitter rivals Wests Tigers, whose fans turned on the Panthers players and coach Ivan Cleary at Leichhardt Oval in June after their surprise 26-6 victory.

According to Champion Data, the biggest combined winning margin across two Sunday games is 94 points, when the Sharks and Bulldogs won big in round 10, 2016, and also in round 21, 2013, when Melbourne and the Titans triumphed in style. On both occasions the Tigers were on the wrong end of heavy defeats.

Biggest combined winning margins over two games on a Sunday in the NRL era.

NRL chief executive Andrew Abdo said it was hard to blame one rule or issue for the blowouts this season, claiming just as many games had gone down to the wire, including Thursday night’s Newcastle-Gold Coast clash. The Raiders and Warriors were tied with two minutes remaining on Friday night.

Abdo said fans were also voting with their eyeballs, with TV ratings up 3 per cent on last year.

“If we had blowout after blowout it would be a different issue,” Abdo told The Sun-Herald. “Nobody wants to see a game that’s done by half-time. It will happen from time to time because of a range of factors.

“I don’t think you can point at a single element like the six-again rule. We look at everything.

“There are always things we need to work on and improve. We want entertaining matches and an exciting competition.

“Heading into the last two rounds there were only three teams without a mathematical chance of playing finals. Having said that, we want to ensure the competition remains open and exciting long term and we have to make sure we have the right incentives, structures and systems for the game into the future.

“Our ratings are up by 3 per cent on last year. More fans are watching than last year, but we are not taking that for granted.”

Plenty of players have spoken about the six-again rule increasing fatigue and making it hard to stop the opposition’s momentum. 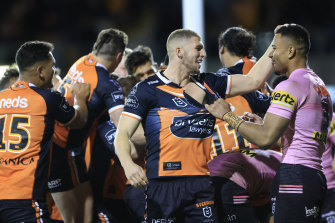 Manly star Kieran Foran shared that sentiment and said it was common for teams to roll downfield up to 90 metres on the back of a couple of six-again calls.

“The good teams control games from the start, or don’t let the game get too far away from them [on the scoreboard],” he said.

Foran was certainly not prepared to take the Bulldogs lightly. After spending three years at Belmore, he said they never backed away from a scrap.

“I think regardless of what happened last time we played they had a few players out through sanctions and whatever, but if you ask any team or anyone who has played against Canterbury, you know you are always in for a fight,” Foran said.

“I know that personally because I’ve played for the club. There weren’t too many games we didn’t compete. You’re always in for a contest. They are that sort of club. They don’t lie down easily.”

Ivan Cleary was unaware of the bookies’ odds for Penrith but said: “It makes no difference to what we do. We’ve had to get used to being favourites in most of our games.

“Any NRL game is tough to win and you have to give it the respect it deserves. That’s what we’ve done this week.”

Cleary said there had been no discussions about the ugly abuse the players received earlier this year when they lost to the Tigers, albeit with more than half-a-dozen Panthers stars missing due to injury or Origin commitments. “There’s enough riding on this game as it stands – we’re not looking back,” he said.

Penrith chairman Dave O’Neill told the Herald earlier in the week: “It would have been great to have this game back at BlueBet Stadium for our fans and for them to get a bit of payback for the way the Tigers supporters treated us at Leichhardt.”