Home » Rugby League » ‘On the brink’: Souths saviour Piggins and his death-defying spirit 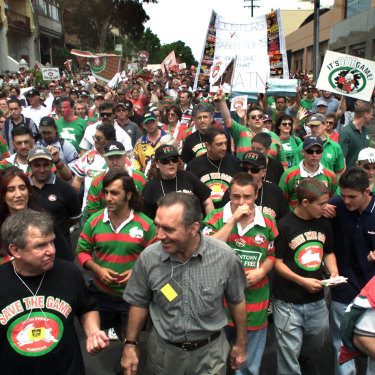 George Piggins casts his mind back to his other great battle for survival.

“Has it been 20 years?” he says. “That’s gone so fast. I can just remember the support we received from so many people around the country and how many people marched in support of Souths.”

Tuesday, July 6, marks 20 years since the Federal Court delivered a verdict in favour of South Sydney, a huge moment in their battle for reinstatement to the NRL after they were excluded from a streamlined, re-unified competition in the wake of the bitter Super League war. While News Ltd subsequently won its High Court appeal, it mattered not. The people had spoken, proof that the game belonged to them and not big business.

And leading the charge was George Leslie Piggins. They marched with him on two separate occasions, packing Sydney’s Town Hall to deliver a message that even Rupert Murdoch could not ignore.

Piggins always played down his role in the Rabbitohs’ return, telling those close to him: “They’re not marching behind me, they’re marching behind the Rabbit”. While many others made significant contributions to having the club reinstated, it would not have been possible without their fearless leader.

“Again, I just remember all the massive public support from all around the country and also from high-profile people like my good friend Alan Jones,” Piggins says.

Piggins has had to again call upon that fighting spirit. The former NSW and Australian hooker concedes he was on the “brink” after being struck down by a lung infection recently. Within 24 hours he was battling four associated life-threatening illnesses, including aspiration pneumonia, after being rushed into the intensive care unit at Royal Prince Alfred Hospital.

“I think my health battle was tougher for the doctors, nurses and my family and friends than me,” he says. “I don’t recall too much of it.

“All I can say is I am battling on and I would like to thank all the fantastic doctors and nurses at RPA Hospital who put up with me for all that time and helped bring me from the brink.

“I also want to thank my great mate and personal doctor Jim Lahood [who was also a Souths director at the time of South Sydney’s reinstatement to the NRL]. If not for him … well, who knows?

“My wife, Nolene, has been amazing, coming to hospital every day and still looking after me now. Also, those many well-wishers helped keep my spirits up.”

Piggins spent five weeks at RPA before he was discharged. 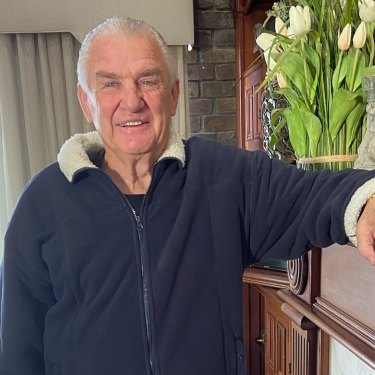 George Piggins relaxing at home after his recent health scare.

“There were plenty of times when it looked very gloomy,” Lahood says. “His recovery has been quite good to this point in time. We still have a long way to go to get where we eventually want to get to.”

The recovery has only just begun, but already there are noticeable signs of improvement.

“I just want to reiterate our sincere thanks to the medical staff at RPA Hospital,” said Piggins’ wife, Nolene. “They were absolutely wonderful and their expertise and professionalism saved George. Also Dr Jim Lahood who diagnosed George and had him in hospital so quickly.

“It was also a great comfort with so many people who offered their good wishes and prayers.

“George still has a way to go, but with the help of his family and friends, he will get there. He is a fighter.”

“All I want to say is that thanks to George Piggins’ leadership and determination, the Rabbitohs exist today.”

Those fighting qualities were on display when the Pride of the League was kicked out of it. No one could rattle a tin can or a sabre quite like Piggins. Having bled for the club as a player, he then coached it for free. When the Dragons made Mario Fenech an offer he couldn’t refuse, he and John “Lurch” O’Neill rushed to the bank and got enough of their own money to keep him at Redfern.

And when the club was at rock bottom, he mortgaged his house and offered up a $3.2 million loan, interest free.

“All I want to say is that thanks to George Piggins’ leadership and determination, the Rabbitohs exist today,” his great mate Norm Lipson says.

Lipson played his own role in the club’s reinstatement. The former journalist did his cadetship alongside then News Ltd boss John Hartigan and suggested the pair meet. Hartigan arrived shortly afterwards at Piggins’ south Coogee home, with some trepidation. 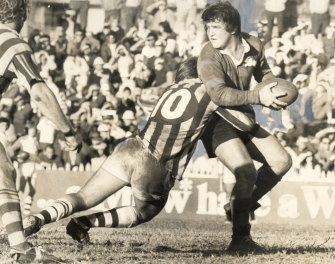 George Piggins during his playing days for South Sydney.Credit:Fairfax Archive

“Being a journalist who knocks on doors, you don’t always get a warm reception,” Hartigan says. “Even though George knew I was coming, I was still unsure he wasn’t going to give me a left hook.”

He needn’t have worried. Hartigan was ushered into the living room, where Nolene offered tea and sandwiches. It is here that the warring factions, in Hartigan’s words, “smoked the peace pipe”.

“He was very gracious,” Hartigan recalls. “They are a great club and it’s a credit to him that he stood up to be counted.

“We got to a point where litigation was cruelling everyone, so someone had to break the ice.

“He didn’t bring up any of the animus that had taken place earlier, he just looked forward to getting the players back onto the ground.”

News Ltd did take the matter back to the courts, an action they won, but by then it was more about the media conglomerate saving face. The real victory was struck on July 6, the day it became patently clear what the fans wanted. 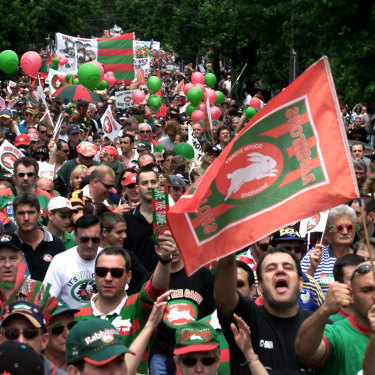 Fans in full voice … the protest to reinstate the Rabbitohs.Credit:Craig Golding

“The reason there is a South Sydney is because of George Piggins,” says former Rabbitohs halfback Craig Coleman, who arranged the second Town Hall march that drew a crowd of 80,000.

“He’s the man who took on the might of Murdoch and News Ltd. Not many take him on, but George was a leader and thousands and thousands followed him. People from all walks of life didn’t agree with big business taking over our game.

“I was lucky enough to speak on the steps of the Town Hall. I get goosebumps thinking about it.

“I’m looking down Eddy Avenue and I can see a sea of red and green still coming around the corner.

“It was probably the biggest victory in world sport.”

“The reason there is a South Sydney is because of George Piggins.”

Many people played their part: Souths Juniors, led by Henry Morris, radio broadcaster Jones, Lipson, Lahood, “Tugger” Coleman. Footy fans, not just those of the South Sydney variety, were among those who contributed the $2 million required for legal fees.

“I can recall how touched we were when pensioners, who could hardly afford it, turned up at the club to donate a dollar or two and wish us the best,” Nolene recalls.

On the night that Souths won the court case, Piggins and his closest supporters celebrated dinner at a Chinese restaurant. Lahood, remembers it all clearly: Clem Kennedy, who coached Piggins and a host of other Souths legends as they rose through the ranks, turned to his former hooker with tears in his eyes.

“Georgie, thank you for saving my footy team,” Kennedy said.

As the night came to a close, the room dispersed and Piggins made his way back to his truck. As he climbed through the door, Lahood asked the man of the moment how he was feeling.

Piggins turned around and grinned.

“Like the man who shot Liberty Valance,” he said.

“It’s an old western movie and it’s apt because there’s a cowboy played by John Wayne and a lawyer played by Jimmy Stewart who team up to beat this thug and hoodlum who terrorised the town,” Lahood says.

“He wasn’t a movie star, but he did what he could.

“How does he come up with a line like that?”