The Panthers’ premiership window is set to remain open for a good few years yet, with club officials confident they can nail star trio Viliame Kikau, Dylan Edwards and Api Koroisau down to long-term deals.

Panthers heavyweights also praised coach Ivan Cleary’s efforts to “overcome a few agendas” to reach another preliminary final, while backing assistant Cameron Ciraldo to pass on any official approach from the Wests Tigers.

Kikau, Edwards and Koroisau are signed until the end of 2022 but can negotiate with rivals in just six weeks. Their value will skyrocket if they can play help the Panthers upset premiers Melbourne on Saturday to book another spot in the grand final.

“The good thing with those three guys is they are already signed for next year, they will all go and have a holiday and have a talk to them when they get back,” Panthers chief executive Brian Fletcher told the Herald on Monday. “But I see no problems with them all staying. I’m not just saying that.

“They are all on good dollars now, they fit into our cap now, so there’s no reason why their management wouldn’t agree to something around the mark they’re all getting paid now.

“They’re three great players and why wouldn’t you want to keep them? If you went to market, you wouldn’t find too many players in those positions as good as them.” 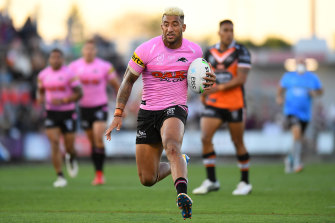 Kikau suffered an ankle injury and picked up a deep cut to his knee, which required nearly a dozen stitches, in the thrilling semi-final win over Parramatta. He will play against the Storm – as will winger Brian To’o, who was a late scratching against the Eels.

There were suggestions St George Illawarra coach Anthony Griffin, the man who gave him his NRL start at Penrith, was keen to sign Kikau, while North Queensland were reportedly hopeful of luring him back to the club where he started out in the under-20s.

James Fisher-Harris has signed until 2026, while Penrith co-captains Nathan Cleary and Isaah Yeo, plus Jarome Luai, are locked away until the end of 2024. The club also re-signed prop Moses Leota for a further two seasons last week.

As for coach Cleary, Fletcher said he had done another outstanding job, regardless of this weekend’s result.

“He’s made a grand final and now the prelim, and the only thing that could be better would be to go on and win one, which we are all striving for … he’s done great,” Fletcher said.

“There’s always commentary about him, there are agendas with Ivan, but I take no notice of it, and the club takes no notice of it. He’s a good person who does a great job, that’s all we’re worried about.”

Ciraldo remains at the top of the Wests Tigers’ wish-list, but Fletcher expected the young coach to stay put and ignore any potential advances from their western Sydney rivals.

“He won’t rush into any other job, especially one that has any risk with it,” Fletcher said.