Mitchell Pearce is off to France to finish his career after Newcastle agreed to an immediate release.

The halfback requested an exit from the final year of his deal last month to join the Catalans Dragons, but the Knights dug their heels in as they searched for a No.7 replacement.

The Knights made it clear they were keen on Luke Brooks at Wests Tigers, with Andrew Johns, who has since returned to his beloved Newcastle, telling The Sun-Herald last weekend: “He [Brooks] looks like he needs a change, and getting out of Sydney would be good for him. I think he can really add a lot to the club.”

However, Brooks has two years to run on his deal with the Tigers, who have no interest in cutting him loose. There was talk of Scott Drinkwater being recruited from North Queensland, but that idea also seems to have cooled.

Newcastle could even opt for a fullback rather than a playmaker, given Kalyn Ponga is a big chance to be used in the halves at some stage next year.

Newcastle confirmed on Monday Pearce was free to head to France. He will replace his good mate James Maloney in the halves at the Dragons, who fell just short of a maiden Super League title last month. 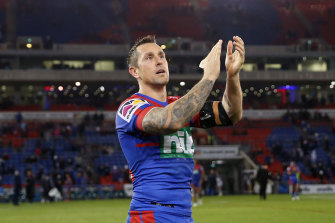 Mitchell Pearce is officially off to France.Credit:NRL Photos

Maloney had pushed hard for Pearce, 32, to make the leap after 309 NRL games.

“The Knights would like to thank Mitchell for his significant contribution since joining the club in 2017, celebrating many highlights including 300 NRL games and back-to-back finals series,” Newcastle said in a statement.

“The club wishes Mitchell all the very best for his future.”

Pearce is on the south coast and will return to say his goodbyes at the end of the week.

Catalans made it clear they wanted Pearce on board. Coach Steve McNamara, who worked with him at the Sydney Roosters, told the Herald last month Pearce’s game would be suited to the Super League, and he would also help nurture the club’s young stars, a role Maloney also performed.