Mitchell Pearce has stepped down as Knights captain.

The playmaker will front reporters alongside coach Adam O'Brien in Newcastle on Thursday to announce the decision, which comes after his latest off-field scandal. 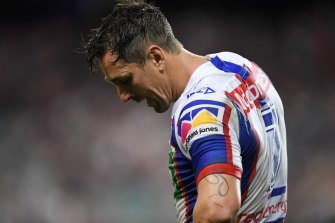 Mitchell Pearce will not lead the Knights in 2021.Credit:NRL Photos

Pearce was allegedly caught sending "racy" texts to a club employee weeks prior to his Byron Bay wedding to partner Kristin Scott.

Knights head of football Danny Buderus on Monday flagged that Pearce would almost certainly not continue wearing the armband. Newcastle confirmed the move on Wednesday.

"Mitchell Pearce will step down as captain of the Newcastle Knights, effective immediately," a statement read.

"Earlier this week, Pearce met with head coach Adam O’Brien, CEO Philip Gardner and general manager of football Danny Buderus, to address recent events and to apologise for the distraction and inconvenience they have caused during the Christmas leave period.

"Immediately following this meeting, Pearce met with his teammates and football department staff, to advise the group of his decision to relinquish the captaincy."

The statement followed Buderus' comments which suggested Pearce may not have continued as captain anyway, given the club is under pressure to deliver a finals win in 2021.

A decision on who will lead the Knights this season is yet to be made public.

"Pearce’s decision followed a lengthy review of current issues, last season’s performance and reflection upon the added pressure the captaincy brings to both his on-field performance and personal life. The club is fully supportive of his decision," the statement said.

"The Knights will continue work to develop a new club leadership model, with a decision on new club leaders – including who will ultimately perform the role of captain – yet to be made."