Four years after being squeezed out by Cooper Cronk, halfback Mitchell Pearce is returning to the Roosters to train before heading off to the south of France to play for the Catalans Dragons.

The invitation came after Pearce, 32, caught up with chairman Nick Politis last week and then had a conversation with Trent Robinson, who coached Catalans before joining the NRL.

“Robbo talked about how happy he was for me, and the opportunity over there,” Pearce says. “You know how deep he gets: he spoke about the language barrier, about body language. He spoke about how proud the town [Perpignan] is about their footy. To win the first comp for them would be amazing.

“And Nick has always been good to me. Even since I left, he’s spoken well of me.”

That Pearce will go full circle with the club he started with as a teenager is significant.

His confidence nosedived when the Roosters signed Cronk at the end of 2017 but was quickly buoyed by a phone call from Storm captain Cameron Smith, who wanted him to join Melbourne. 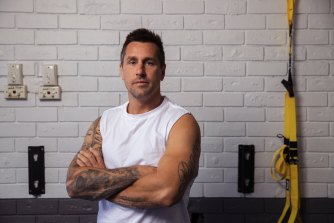 Mitchell Pearce at E-Lab in Waverley after announcing his departure from the NRL to play in France. Credit:Dominic Lorrimer

“It was a setback, obviously, bringing someone better than you to the club, which I can admit now,” he says, grinning. “It was a kick in the guts. When Smithy called me after that, it was the lift I needed. I seriously considered it, and I wonder how things would’ve panned out if I had gone down there and played with him, but I went to Newcastle because I wanted to be in Newcastle. And a lot of good things came out of it.”

Which brings us to his departure. Has he left the Knights in the lurch, especially if they can’t secure Tigers halfback Luke Brooks?

“I tried to be as honest with them as I could be,” Pearce says. “I had a one-year contract and the club said this was likely to be my last year anyway. Both parties understood what was best for them. It might’ve put the club in a hard situation right now, but that wasn’t my intention at all.

“The hard conversations I had with [coach] Adam O’Brien made me feel like everyone understood. I was never asked, ‘Why are you doing this to us?’ Not face to face anyway. I’ve got nothing but good things to say about the Knights.” 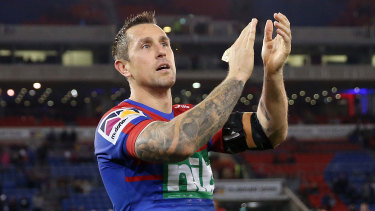 “I’ve got nothing but good things to say about the Knights”: Mitchell Pearce.Credit:NRL Photos

Pearce snapped up the Catalans offer for many reasons. First, he wants to win a Super League title under coach Steve McNamara, who coached Pearce when he was an assistant at the Roosters.

But he also wants to grow. He admits he’s “still a 17-year-old in a 32-year-old’s body” in many ways. He wants to become more “worldly” and that’s difficult in the NRL with its regimen of eat-sleep-six-to-go-repeat.

His father, Wayne, said this week his son has become “institutionalised” after 14 seasons in the NRL. In some ways, Pearce stepped out of his father’s shadow. In other ways, he never could. It’s never been easy.

What’s mostly prompted his departure are the events of the past year, which included the dramatic cancellation of his wedding and relationship breakdown.

“It’s drained me more than I ever thought,” Pearce admits. “It was the worst year of my life. Stuffing up your wedding, all the shame that came with that. It’s not easy. The noise around the wedding and the families was hard. Super hard. It did make me tired by the end of it. It’s a big part of why I’m leaving.”

Sure, Pearce has made mistakes off the field, but the difference between him and most players is that he’s admitted them and never apportioned blame to others. The public floggings he’s received have rarely fitted the error of judgement.

“If you do the wrong thing, you have to own up to it,” he says. “What I don’t like now, with player behaviour, is how players get morally stitched up. I don’t like that. If I’ve done the wrong thing, I expect punishment. But what I don’t like is it’s getting a bit too easy to give people up. The NRL is fining players when they haven’t really done anything wrong. It’s taken the fun out of the game. That stuff is suffocating. Players feel like they’re in a foam box.”

Apart from training with the Roosters, Pearce will also undergo gruelling sessions at E-Lab Training in Waverley with veteran trainer Matt Garry, who has worked with Pearce throughout his career.

He leaves just after Christmas to begin a two-year deal with the option for a third Catalans’ way. 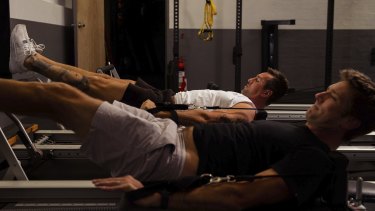 He told me all this over lunch in a Bronte café during the week.

He’s much bigger than the teenager I recall interviewing before his first-grade debut. More tattoos, hair greying on the sides … but still talking a million miles an hour.

The end of his NRL career reminds me of a line from the late sportswriter Hunter S. Thompson when his first wife asked him late in his life: “So, Hunter, did it all turn out as you expected it to be?”

“Well of course not,” Thompson replied. “But at least it was glamorous.”

Pearce laughs when I say this to him.

“I like that,” he says. “I played over 300 NRL matches, a lot of rep footy. I’ve been really hard on myself as a player. But now that I’m a bit older, I appreciate what I’ve achieved. You doubt yourself because you lost a grand final – I was 21. You doubt yourself because you lose an Origin match – I was lucky enough to play in those matches. I’m proud of myself for what I’ve been able to do.”

The outpouring of grief – and fond memories – for the late, great Australian Test cricketer Alan Davidson is testament to the man and player.

His favourite ground was the SCG, where he came as a young boy from the Central Coast to watch cricket, before playing there all the way up until his final Test alongside great mate, Neil Harvey, in February, 1963.

A public memorial service will be held at the ground on Monday, November 29. All welcome.

The quote
“Knock him out! I have to work tomorrow.” – A frustrated fan wanting Tim Tszyu to finish his bout with Takeshi Inoue. A young fan followed up: “Yeah, and I have to go to school!” I love the world.

Thumbs up
What’s better: Australia beating the Kiwis in the T20 World Cup final or having a handful of England players on the charter flight from Dubai to Brisbane ahead of the Ashes? “I just can’t have Australia win that game,” England fast bowler Mark Wood said before the match. “It’s going to be unbearable. So, I’m going for New Zealand.”

Thumbs down
The revelations from former Yorkshire cricketer Azeem Rafiq about the systematic racism rife in English cricket are disturbing. “Me and other people from an Asian background … there were comments such as, ‘you’ll sit over there near the toilets’, ‘elephant-washers’,” the 30-year-old Rafiq told a UK parliamentary inquiry.

A-League Men, which has the first day of the rest of its life with the start of a new season on Friday night. The Wanderers host Sydney FC at CommBank Stadium on Saturday.

It’s an even bigger weekend for …
The Wallabies, who are starting to resemble a slow-moving crash. An eighth straight loss to England under Eddie Jones means they must beat Six Nations champions Wales this Sunday (4.30am AEDT) to avoid becoming the first Australian side of the professional era to lose every match of the European spring tour.