Melbourne have declared Norm Smith medallist Christian Petracca as a certain starter in Friday night’s semi-final against the Brisbane Lions, as he battles a bad corkie and the mental challenge of playing with a hairline fracture in his fibula.

Demons coach Simon Goodwin was adamant that Petracca was “100 per cent playing” after training well earlier in the week, provided he gets through Thursday’s captain’s run without an issue arising. 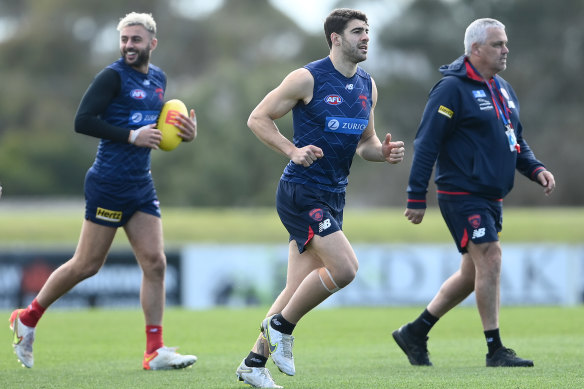 “He’s moving incredibly well and we have been really surprised with his progression during the week and he is the type of competitor that you want,” Goodwin said.

The 26-year-old, who has not missed a game since 2020, has been very open about his hairline fracture and Goodwin said the game presented an opportunity for Petracca to show he could play after facing some adversity early in the week.

He dismissed suggestions his options for managing pain might be limited, with Goodwin claiming Petracca would be right to go without pain management.

Goodwin said the midfielder would play his normal role but admitted the side’s forward woes were causing him some selection headaches as they contemplated including key forward Jacob Van Rooyen on debut or Tom McDonald after he returned from a foot injury in the VFL a fortnight ago.

Van Rooyen has impressed in his first season and has been emergency in the past four rounds. McDonald pulled up slightly sore from his first hitout and the Demons may decide he needs another week before returning if Melbourne makes it through to the preliminary final.

Goodwin said Ben Brown had struggled in the qualifying final, but he had been happy with his efforts leading into that match, while Sam Weideman was not mentioned.

“Selection is tight … the guys underneath Tom McDonald and Jacob Van Rooyen are putting pressure on our guys in the front half of the ground,” Goodwin said.

Goodwin conceded that on reflection Max Gawn should have been given more time in the ruck with Luke Jackson spending more time forward.

“We will certainly give Max a little bit more responsibility throughout this week. He is a premier ruckman in the competition. We know what he can deliver for us and that is certainly something we have looked at,” Goodwin said.