Fringe Collingwood player Maddie Shevlin is bound for Richmond as part of a deal which should make Sabrina Frederick a Magpie.

The AFL is set to push on with the AFLW sign and trade period, due to start on Monday, despite Victoria’s seven-day lockdown. 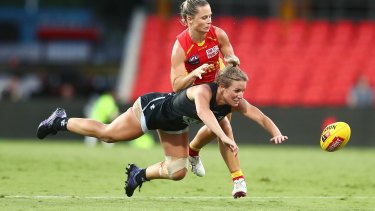 With uncertainty surrounding when the four clubs currently without AFLW teams – Hawthorn, Essendon, Port Adelaide and Sydney – will enter the competition, existing teams will be able to sign players to two-year contracts with the proviso those players will not necessarily be ring-fenced from expansion, depending on whether the league decides to introduce any new teams ahead of the 2022/23 summer season.

Richmond forward Frederick, according to women’s football sources, is bound for the Pies after two middling seasons at Punt Road, having started her AFLW career at Brisbane. 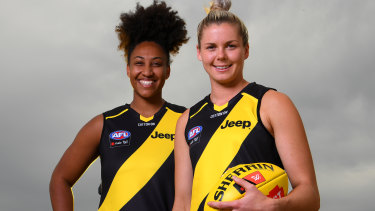 Wing/forward Shevlin, who played three games for the Pies this year, is set to head the other way to bolster the improving Tigers.

Having been let go by the Blues at the end of the season, Loynes, 35, is set to join the Giants, either as a delisted free agent or in a trade involving Giant Jess Dal Pos, who is heading the other way to Carlton.

Veteran ruck Alison Downie also looks likely to join Collingwood, having also parted ways with the Blues at the end of the season.

North Melbourne could also have a relatively busy trade period, showing interest in Western Bulldog Kim Rennie. The Roos could however lose Daria Bannister to Geelong and Jasmine Grierson to the Giants.

Giant Elle Bennetts is likely to join the Dogs.

The Cats will be reasonably big players, making a move for Adelaide’s Chloe Scheer but widely expected to lose emerging star Olivia Purcell to Melbourne.

St Kilda had been interested in Crows star Ebony Marinoff but she appears likely to remain in Adelaide.