Melbourne Storm coach Craig Bellamy doesn’t know if he has any anti-vaxxers at his club but with the finals about to begin, the players will be vaccinated as a group in the days after their season ends.

The Storm take on Manly Sea Eagles in a qualifying final on the Sunshine Coast on Friday night with the NRL minor premiers chasing a second straight premiership.

Bellamy said on Friday that he wanted all NRL players vaccinated before this season as a way to promote the vaccines to the public but fears the league would look like it was jumping the line stopped that happening.

Storm staff members have been able to seek vaccination shots but the Storm don’t want any players potentially reacting badly after a vaccine shot during the finals.

“I was amazed last year that we weren’t vaccinated,” Bellamy said on Thursday.

“We didn’t want to look like we were jumping the line but it would have set a good example for everybody else, but that hasn’t happened.

“There are some people that the vaccination affects whether you feel a bit off for two or three days or a week or just 12 hours. It affects different people in different ways, so we have decided that the guys who will get vaccinated will get it at the end of the season.

“I don’t know of any anti-vaxxers in our team but, having said that, if we have, that is their right, I suppose.

“But just like the general public, if you are not vaccinated, there are some things you won’t be able to do.

“I don’t know the ins and outs but a couple of days after we finish, we will get vaccinated as a team. I don’t know of any anti-vaxxers in the players or staff, we will find out when we finish the season.” 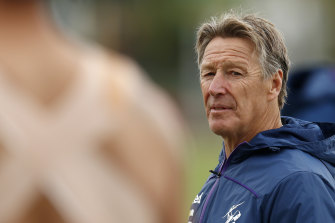 Storm’s players and staff can move around parts of the community while based in Queensland but face some restrictions and are tested regularly under NRL protocols.

Storm five-eighth Cameron Munster remains uncertain to play on Friday night but he trained on Thursday.

Munster cut his knee in the second-last round against Parramatta Eels and needed stitches but the wound became infected later, forcing him need a surgical clean and re-stitching at hospital.

“It’s not that he’s got a knee injury, it’s just that it’s been split open, and they’ve added stitches internally and on the outside and they are worried about it opening up again,” Bellamy said. 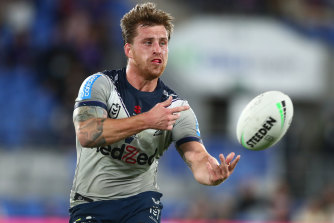 “It will be up to Cameron. How comfortable he feels and whether it will affect him too much. He’s done most of the training today, we will see how he is tonight and tomorrow and make a decision.”

Bellamy said he wouldn’t risk Munster if he couldn’t play.

“We won’t take any great risks with Cameron, the decision is up to him and he is an experienced player,” Bellamy said.

“It doesn’t look like it’s hindering him at all but it is a bit of a risk. It’s not for me to make that decision, it’s his knee and we will do what he feels comfortable with.”

If the Storm lose and have to play next week, there is a chance star winger Josh Addo-Carr could return from the hamstring injury which will keep him out of this week’s game.

“If we have to play next week, we would be hopeful Josh would be available but the longer he has out, the better he will be,” Bellamy said.

“He has been doing a fair bit of training this week or a fair bit of running where he couldn’t do that last week at all. If we need to play next week we were reasonably confident he will be right.”