Collingwood defender Mark Keane has chosen to remain in Ireland rather than return to play out the final year of his contract, having battled homesickness in recent years.

The players were informed of his decision on Friday morning with Keane telling the club he wanted to be closer to family. 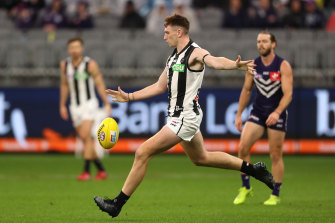 Mark Keane has decided to return to Ireland.Credit:Getty Images

Football manager Graham Wright said it became obvious in the new year Keane and the club needed to decide on his future.

“Unfortunately, Mark has suffered from homesickness his entire time at Collingwood. He went home early in August prior to the season finishing and returned after training had started in November,” Wright said.

“Mark didn’t return for training in the new year and we decided, along with Mark, that the rigours of AFL football combined with being away from home are too much for him at this time.”

As a category-B rookie, Collingwood will not be able to replace Keane on the list via the pre-season supplementary selection process.

Keane played in hurling for his local team Ballygiblin on the weekend with Collingwood’s blessing as they advanced to the All-Ireland semi-final against Fullen Gaels.

The 21-year-old indicated after that game he was open to playing in that match despite the Magpies still anticipating his return to training.

Keane played five games with the Magpies as a defender after making his debut against Fremantle in round nine, 2020 but struggled to cement a place in the team as the competition had an interrupted two years due to COVID-19.

Reports from Ireland indicate Keane will play with Cork County in hurling in 2022.

Collingwood’s most successful Irish recruit was Marty Clarke who played 73 games in two stints at the Magpies with Kevin Dyasc, Caolon Mooney and Anton Tohill also having been on the Magpies’ list before Keane.

The Magpies are embarking on a partial rebuild after finishing 17th in 2021, recruiting a bunch of young players including father-son midfielder Nick Daicos under new coach Craig McRae who replaced Nathan Buckley.

They have been training with depleted numbers this week due to COVID-19 and remain without match-winning midfielder Jordan De Goey, who the club stood down as they await the outcome of a court hearing in New York next week following the 25-year-old being arrested and charged with assault while in America in the off-season.