How much good football has Adam Reynolds got left in him?

The answer differs depending on whether you ask the man himself or South Sydney. As debate surrounds how many tomorrows remain, there is little doubt he is the halfback for today. 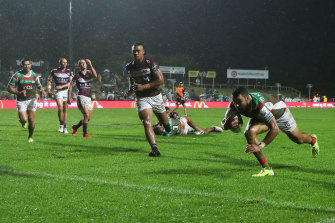 It was a dark, damp night at Brookvale. Reynolds couldn’t have been any more in his element. You can’t afford many off days when you’re off contract, and Reynolds didn’t waste the conditions.

Even though he only participated in half of it, he was still the man of the match as the Rabbitohs scored a 26-12 win at Lottoland.

The kicking game on nights like these needs to be spot on and Reynolds had the Steeden on a string. Never more so than when he grubbered the ball into the in-goal and then beat the opposition, and his teammates, to regather it and score.

But his greatest trick was to come. With his side leading Manly by just four as half-time approached, the premiership-winning playmaker, with only a 10-metre channel to work in from the sidelines, produced an audacious 40-20. The Rabbitohs scored from the ensuing set. It proved a match-winning advantage. 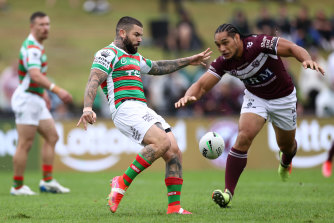 Adam Reynolds was superb at Lottoland.Credit:Getty

When Reynolds was knocked out of the game, suffering a head blow in a collision with Sean Keppie just after half-time, his team lost its way.

One man who has his contractual affairs in order is Des Hasler. A dismal first-up performance against the Roosters raised questions over his future, but it is now secured.

His troops produced a much-improved performance. Despite losing Andrew Davey with just two minutes on the clock – as well as Cade Cust in the second half – the Sea Eagles gave the premiership fancies a fright.

One of their tries, to Lachlan Croker, came while Latrell Mitchell was in the sin bin. Whether he deserved to be there remains a talking point. The Rabbitohs fullback was adjudged to have taken Daly Cherry-Evans as the latter pursued the football. If there was any contact, it was minimal.

The opposition fullback also had some forgettable moments. Dylan Walker, standing in for the injured Tom Trbojevioc, was a target throughout. With bombs becoming a lottery at Lottoland, he spilled his fair share.

Manly still had most of the possession but couldn’t take advantage of it. They threatened an upset when Martin Taupau scored with a quarter of the game left to bridge the gap to two.

The teams went at each other for 80 minutes, but that wasn’t enough for some players. With just one second left on the clock, several decided it was time for a brawl. It resulted in “the whole incident being put on report”, while Jayden Su’a was sent to the sin bin.