And now, in the latest episode of "Where the Hell is Latrell Mitchell playing next season?", it can be revealed the Roosters have shopped the star centre to the Toronto Wolfpack. 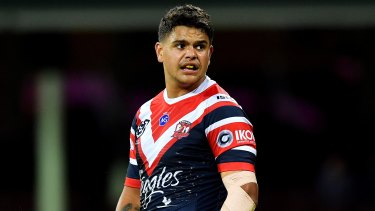 The approach was made to Toronto’s head of rugby, former England coach Brian Noble, when he was in Australia last week on the hunt for potential recruits.

It would also solve what is becoming a major headache for the Roosters as Mitchell struggles to find a club he wants to play for.

Toronto doesn't seem like a solution, though. Noble wasn’t available for comment on Monday night but chief executive Bob Hunter said: "I have had several discussions with Brian in the last few days and Latrell’s name hasn’t been raised at all."

The well-worn lines about Mitchell being "poorly advised" and "pushed and pulled" in all directions are true.

We won’t rehash the madness of the past six weeks, but to understand how crazy it’s become consider this: three different people have recently approached Souths, all claiming to represent Latrell Mitchell.

Three? He has one accredited agent and that is Wayde Rushton.

Souths, meanwhile, are getting sick of insisting they don’t want to sign him: neither now or when they find out the extent of their salary cap relief following the retirement of captain Sam Burgess with a shoulder injury.

Furthermore, this column has been told about one adviser telling a Sydney club he can "deliver Latrell" on one condition: they give him a $50,000 spotter’s fee. The person in question did not return calls.

This is where the NRL needs to start taking a closer look.

It has recently taken control of the Agents Accreditation Scheme, but it is understood head office — particularly with new chairman Peter V’landys officially in the building — will be taking a much closer look at the way player managers do business. 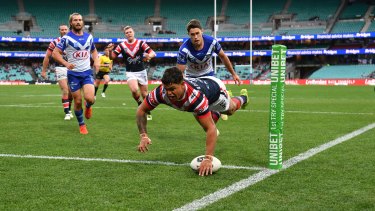 Latrell Mitchell had an up and down season in 2019 – but still finished as the league’s top pointscorer and second top tryscorer.Credit:NRL Photos

That’s a stretch. Speculation about player negotiations have been filling newspaper column inches for decades with managers and clubs using select reporters to inflate their player's market value.

But there’s no doubt Mitchell feels cornered. The way he took on racist online trolling earlier this year was brave and commendable. So, too, was the way Roosters coach Trent Robinson backed him.

That's why it will be a great shame if Mitchell leaves. The Roosters have helped Mitchell behind closed doors at Moore Park more than any other player. 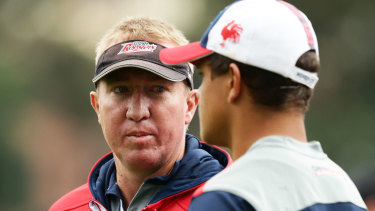 Trent Robinson backed Latrell Mitchell after the star centre was the target of vile online abuse during the 2019 season.Credit:Getty

With every new club Mitchell has been linked to, it becomes clearer the best place for him is the Roosters. Sure, he could squeeze extra dollars out of other clubs. He could get the "fullback money" he wants.

But becoming a "Rooster for life" brings wealth that can't be quantified.

He wouldn't be getting just $800,000 a season. He'd have the guidance, care and football intelligence of Robinson, the power and influence of Nick Politis, and he'd be playing on a left-edge outside of Luke Keary and Boyd Cordner that will surely get him back into the NSW side sooner than later.

The Roosters, though, aren't budging. When Mitchell secretly met with the Bulldogs during the finals series, it did irreparable damage to his reputation at the club.

There are also concerns that Mitchell will struggle for motivation. He's won two premierships, an Origin series win for NSW and Australian jumpers — at the age of 22.

When he met with the Cowboys, club officials asked what appealed most about playing in Townsville.

He didn’t talk about winning premierships, about playing at the club’s new stadium, about taking the field alongside Jason Taumalolo or Michael Morgan.

"Fishing and shooting," he said.