Sam Walker and Victor Radley saved the Sydney Roosters as they were given an almighty fright by the North Queensland Cowboys.

The Cowboys thought they were about to draw level late on in Townsville on Saturday when Scott Drinkwater scored.

But the bunker correctly ruled Drinkwater had two attempts at promoting the ball across the line after being tackled by Drew Hutchison.

And the Roosters made Drinkwater pay as Radley produced a brilliant run downfield before Walker did well to step back inside from dummy half and score the match winner.

Winger Matt Ikuvalu finished with a double late in the game to blow the scoreline out.

It was hardly a convincing performance by the Roosters, who will remain in touch with the top four after the 34-18 win at Queensland Country Bank Stadium. 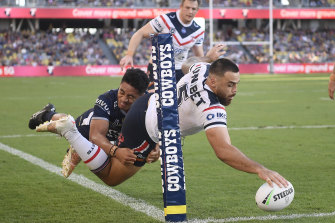 The Roosters took a long time to put away Canterbury a week earlier, which came on the back of a couple of heavy defeats to Melbourne and Penrith.

They will welcome the return of skipper James Tedesco for Friday’s clash against Kalyn Ponga’s Newcastle.

Tedesco was given a spell after the Origin series, while Sio Siua Taukeiaho (hamstring) is also a chance to play against the Knights.

The Roosters trailed 12-0 after tries to Javid Bowen and Hamiso Tabuai-Fidow. “The Hammer” was never going to be stopped once he was put into space by Drinkwater after a couple of set re-starts and sloppy Roosters defence.

But tries to the ever-reliable Angus Crichton, Billy Smith and Joey Manu right on half-time handed the visitors the lead for the first time.

Had Walker’s right boot been working, the Roosters could have put the result to bed much earlier. Walker was sacked and Smith given the chance to convert Ikuvalu’s try after full-time.

The Cowboys lost Bowen to what appeared a bad knee injury. They had already lost Valentine Holmes a few nights earlier to a shoulder injury during Origin III, which shifted Tabuai-Fidow to fullback. The sight of The Hammer in full flight brought fans to their feet on a couple of occasions.

A couple of Cowboys players appeared to become emotional in the sheds after full-time.