At last, something resembling a contest!

It was billed as the match of the round, not that there was much to measure against given what preceded it. The average winning score in the previous round-four games was 37.5 points. Again, another favourite prevailed when Canberra won their fifth consecutive clash against the Gold Coast.

However, it was closer than the final 20-4 scoreline suggested. The Titans remained in the battle for almost the entirety despite losing halfback Jamal Fogarty (quad) and winger Anthony Don (hip flexor) to injury along the way. A late try to Ryan Sutton blew out the scoreboard. 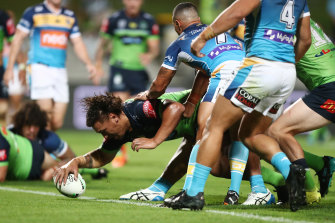 Raiders prop Josh Papalii plants the ball over the stripe against the Titans.Credit:Getty

The Titans responded with a pearler of their own, the diminutive Corey Thompson finishing off a slick movement. Alas, it was the only time they troubled the scoreboard.

The Titans should have led at the break. On two occasions, Don set himself for the tryline at unbackable odds. Twice he was denied. Jack Wighton stopped him the first time, Charnze Nicoll-Klokstad the second. Both were desperate defensive plays of the highest order against a noted finisher. This would have pleased Ricky Stuart as much as anything either of his stars produced with the Steeden.

Ryan James was given the honour of starting the game against his old club. It meant Josh Papalii had to wait for his heavyweight showdown with David Fifita and Tino Fa’asuamaleaui. The latter had a cracking start to the game, notching 132 running metres by the 35-minute mark.

But “Big Papa” was not to be outdone. Early in the second half, he charged at the tryline, took several defenders with him and planted the ball down. The Maroons enforcer finished the game with 166 metres and 29 tackles.

It took another forward, Sutton, to crash over in the dying moments to put it beyond doubt.

Despite the loss, there is cause for optimism. The Titans are well coached, play an attractive style and display a resolve not seen in most previous sides from the glitter strip. Their discipline, however, let them down. They got away with silly errors in wins against the Broncos and Cowboys, but the ruthless Raiders are another matter.