After enduring an extended period of dashed expectations, Carlton finally have reason to celebrate after defeating their arch rivals Essendon in a high-scoring encounter at the MCG with former Bomber Adam Saad instrumental in the victory in his first match against the club he walked out on at the end of last season.

Blues fans had plenty of reason to counteract the inevitable boos that came Saad’s way as Carlton overcame a 21-point deficit to win the pulsating match by 16 points – 19.9 (123) to 16.11 (107) – with a sealing, centre clearance goal from club favourite Patrick Cripps lifting them from their seats at the 20-minute mark of the final quarter. 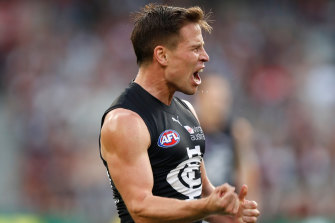 Matthew Owies celebrates a goal for the Blues against the old enemy, Essendon.Credit:Getty Images

Cripps was huge when the game needed to be won, bouncing back to win crucial contests and inspire his team.

The win will ease the pressure that was building on Carlton coach David Teague as he had to hold his nerve when Essendon won the early ascendancy – his move of Ed Curnow to Zach Merrett helping shift the match Carlton’s way. 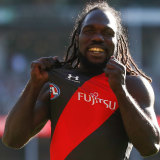 Bomber livewire Anthony McDonald-Tipungwuti is all smiles following one of his four goals.Credit:Getty Images

The turning point arrived midway through the second quarter when Essendon’s Anthony McDonald-Tipungwuti grabbed a loose ball within range.

The Bombers were 21 points up and had already scored 53 points nine minutes into the second term.

Having kicked three goals in the first quarter after bagging five goals on Anzac Day, the 28-year-old was high on confidence and displaying a touch of arrogance as he stepped his opponent.

A second later he was on the ground, pinged for holding the ball after Luke Parks, in just his third game with Carlton, ran him down.

Two minutes later, Carlton’s Matt Owies kicked his first AFL goal and the momentum of the game shifted as Blues veterans Eddie Betts and Curnow then kicked a goal each to narrow the margin to under a goal with Essendon only scoring two behinds for the rest of the quarter. 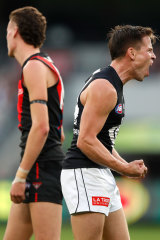 Owies celebrates one of his three majors against the Bombers.Credit:Getty Images

The run of unanswered goals to the Blues would stretch to five as they opened up a lead early in the third quarter that Essendon could never quite overcome.

Until Parks’ game changing tackle, Essendon had been better than Carlton, using the ball more efficiently going forward and finding loose men everywhere. While the Blues played at a breakneck speed, the Bombers were more controlled with their forwards enjoying better service and their backs able to set up for turnovers.

The Blues only looked like scoring when Saad roared out of defence and launched a long ball into an open forward line, with the boos of aggrieved Essendon supporters in his ears.

Devon Smith became a tackling machine, embarrassing Cripps early in the second quarter when he jumped the Blues’ skipper as he stood on the wing contemplating his options like a little brother about to be robbed of a bag of lollies by his older sibling.

But the Carlton captain had the last laugh, lifting exactly when the team needed him in the final quarter to tilt momentum the Blues’ way, with key forward Harry McKay kicking two last quarter goals to stretch the lead beyond Essendon’s reach.

Along with Walsh and Curnow, he helped the Bombers control the game with the addition of Sam Petrevski-Seton as the medical sub to replace the concussed Paddy Dow giving Carlton much needed run in the second half.

The Bombers’ rebuild is behind Carlton but they have exciting youngsters with Essendon supporters likely to leave relatively satisfied with what lies ahead.