Conventional wisdom suggests that installing a caretaker coach releases the shackles and allows a team’s players to play with greater freedom and dare.

On the evidence of the first three quarters from a bleak Sunday afternoon at the MCG, Robert Harvey is not a subscriber to conventional wisdom. Rarely can a Collingwood side have played as dishearteningly for its supporters as the Magpies did until the final change on Sunday. 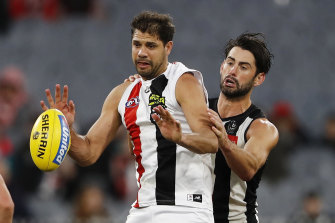 Paddy Ryder and Brodie Grundy compete for the ball during St Kilda’s win on Sunday.Credit:Getty Images

And then, out of nowhere, came a flood of goals. From 49 points down to St Kilda late in the third term, the Pies played direct and dominant footy. When Mason Cox, a non-factor for most of the game, kicked his first major deep in the final term, the Pies trailed by just eight with more than two minutes remaining. It was a run that left more questions than answers. Where had that been?

The back half of a season like the one the Pies are enduring should be laden with enticing tastes of a sweet future to come, but until the last quarter there was barely a redeeming feature from this performance. Collingwood were outdone at the contest while playing grim, error-riddled football, thrashed by a St Kilda side that will somehow end the round only half a game and percentage outside the top eight.

The Saints had barely fared better than their fellow 2020 finalists in the first half of the year and were less trustworthy than the Magpies. But St Kilda, experienced soul-searchers by mid-season, have at long last found a harder edge. 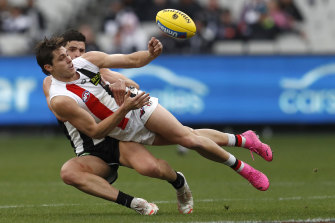 Having kept Richmond to two goals in wintry conditions nine days earlier, the Saints again relished playing in the elements, although in truth the rain was only passing.

For three quarters, it looked like St Kilda had clearly rolled up their sleeves since the bye. A team that has conceded three of the six highest scores in the league this season again stifled their opposition.

Doubtless they were helped by the Pies’ staccato ball movement and poor finishing. But the Saints looked tough. The combination of Paddy Ryder – having returned from a whirlwind journey to Western Australia following a family bereavement – and Rowan Marshall again seemingly unlocked the keys to the entire Saints’ game plan.

Both were excellent, feeding the grunt of Jack Steele and Luke Dunstan. Bradley Hill was also terrific, providing an important run and embracing the contest when called upon.

But the Saints’ fadeout was a reminder of the frailty that marred their April, May and June. They won’t give the finals a shake if they play like they did late in this one.

The wrong side of the coin

In a bizarre moment befitting the standard of the first half, Saint Dan McKenzie was the beneficiary after a confusing passage of play. Steele Sidebottom heard the umpire’s whistle after what appeared to be a free kick for high contact to Brodie Grundy and stood still, but play-on was called. Jack Higgins pounced, dishing off to Dunstan who put the ball in front of McKenzie to run in and kick just the seventh goal of his almost seven-season AFL career, and third in the space of five quarters. Sidebottom was left dumbfounded by the call.

Young St Kilda rebounding defender Leo Connolly had an unusual AFL debut in round 15 when he was a late promotion to the medical substitute role after Jack Billings was pulled out at the 11th hour. Connolly got a taste of the level when Nick Coffield was subbed out of the win over Richmond. Connolly’s call-up had come so late that he didn’t receive his jumper in the now-ubiquitous pre-game ceremony in the rooms. But the Saints made sure he got his chance, with loved ones on hand to see Connolly presented with the No. 37 guernsey on Sunday ahead of what was his second match.