Both the Western Bulldogs v Essendon and Sydney v GWS finals at the UTAS Stadium in Launceston have sold out after going on sale on Monday. 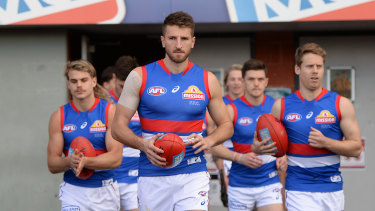 The Western Bulldogs come out onto UTAS Stadium in Launceston earlier this seaosn.Credit:Getty Images

Since then, tickets have popped up on a re-sale website and are being touted for as much as $280 a seat. Face value for week one finals tickets range from $35 to $90.

UTAS Stadium’s usual capacity is close to 20,000 but is only allowed a maximum of 10,000 for the elimination finals.

The other two finals for the weekend will be played at Adelaide Oval in front of a 15,000 capacity crowd.

South Australia, like Victoria, has laws that heavily limit the price a re-sale ticket can be inflated to. Tasmania has no such legislation.

On its website the AFL says it tried to monitor re-sale sites and where possible they can “cancel tickets that can be identified when advertised above face value”.

The league announced on Monday it would not increase the prices of finals tickets for this weekend. Those prices were frozen in 2018, 2019 and 2020 too.

“It has been a challenging season for everyone, the uncertainty in the community resulting in the constant changes in fixturing has tested our whole industry, none more so than footy fans around the country,” the AFL’s head of commercial and customer Kylie Rogers said.

“Matches without fans are simply not the same, they don’t evoke the passion and emotion that is so powerful to be a part of, especially when watching from the stands.

“With this in mind, our commitment remains to keep finals footy prices as an affordable option and thanking the members and fans who have stuck by their club’s this season.”