Football’s ghouls came to Marvel Stadium on Sunday. They were on the train home by half-time. Things would have been hurtling towards panic stations at Carlton had the Blues lost to middling Fremantle, but the crisis was averted and definitively so. Carlton were the better side pretty much from the outset, although first-quarter inaccuracy kept the Dockers in touch.

The pressure valve was released though after a dominant second quarter from David Teague’s men, which provided a glimpse of what is possible this year at Ikon Park. It took Fremantle until past the halfway point of the second term to register their first inside 50 for the quarter as Carlton controlled every line. By the long break the margin was 35, stretching beyond 10 goals during the third term before Freo belatedly stemmed the tide. 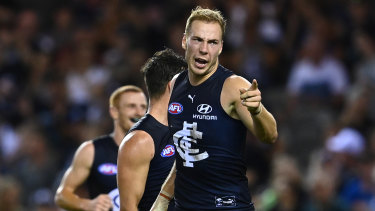 For Fremantle, it was a harsh reality check. Without captain Nat Fyfe – missing through concussion – the Dockers looked rudderless. Not that it mattered in the grand scheme of the game, but they also ended the match down to just 21 fit men, with Hayden Young (hamstring) and Lachlan Schultz (head knock) both worse for wear. It’s doubtful Fremantle have played worse in Justin Longmuir’s still relatively short tenure.

This moment had been a long time coming. After six seasons away in Adelaide, and then another in which Victorian Blues fans couldn’t watch in person, the faithful were made to wait an extra couple of weeks to see Eddie Betts in the flesh. But like the great showman he is, Betts – in his 200th match for Carlton – delivered the day’s piece de resistance when he dribbled home from deep in the forward pocket late in the second quarter. It was like watching a legendary rock band perform a favourite hit years after their peak, the notes sounding all the sweeter for the years in exile and the knowledge that this is the start of the farewell tour.

It was a rousing quarter for Blues veterans. Ed Curnow took advantage of the new “stand” rule to bend back a beauty on the run from just inside the boundary line, while Marc Murphy – following a week in which his position in the side came under question – also delivered with a major.

It hasn’t been the easiest of introductions into Carlton colours for Zac Williams. Having missed the season opener against Richmond through suspension, Williams was in the wars against the Dockers. He went down with a leg issue following a first-quarter tackle from first-season Docker Heath Chapman. Williams returned to the field, but for a moment he probably wished that he hadn’t, copping a ball straight into his groin, leaving him gasping for air. It was a huge credit to the former Giant then that he played the game out and was a key contributor to his side’s thumping win.